Marking a New Era in Healthcare Education in South Georgia 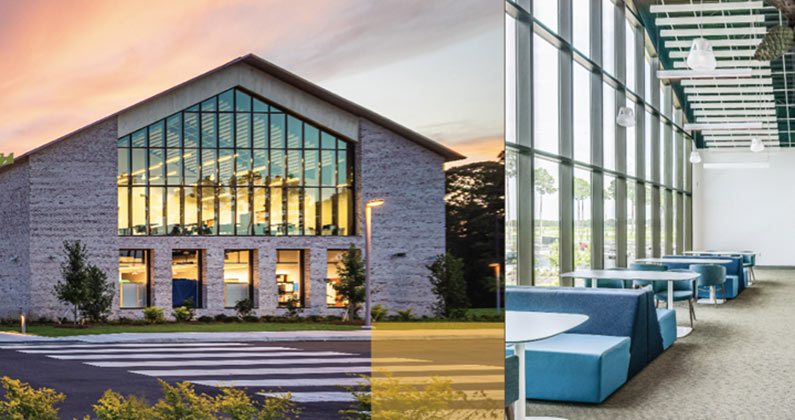 “Through the establishment of PCOM South Georgia, Philadelphia College of Osteopathic Medicine proudly extends its commitment to the state of Georgia—an assurance to educate students and to retain graduates to serve on the front lines of community health.”
– Jay S. Feldstein, DO ’81, President and Chief Executive Officer

The College’s first reach into the South

PCOM’s commitment to the South began nearly two decades ago. An assessment of growing health disparities in the southern United States substantiated an infrastructure for support of new osteopathic and graduate healthcare-focused education programs. Expansion was naturally aligned with the College’s strategic direction at the time—a desire to be less reliant on nonpreferred state appropriations and a design to help control the need for tuition increases. The College was also cognizant of its position in the Northeast. Philadelphia, in particular, had become among the most saturated healthcare markets in the nation.

A unique growth opportunity arose in the early 2000s when the Osteopathic Institute of the South (OIS) sought a partnership. As a result of the sale of a nonprofit hospital, the OIS had a viable commodity: a network of third- and fourth-year clinical rotations, internships, residencies and postgraduate training opportunities. But the closest medical school was nearly 350 miles away.

Seeking to open an osteopathic medical school with the mission of recruitment and retention of medical students from the South for the South, the OIS targeted and approached PCOM leadership.

The College’s reach into the South officially ensued in 2004 under the leadership of Matthew Schure, PhD, then president and chief executive officer. PCOM chose suburban Atlanta for its first branch campus. By 2005, PCOM Georgia, located in Suwanee, Gwinnett County, welcomed its first class of 80 doctor of osteopathic medicine students.

PCOM Georgia quickly became part of the unique and sustainable story that resonates the College’s osteopathic tradition and teaching mission to prospective and current students, employees, alumni and stakeholders. To date, the College has conferred nearly 1,950 degrees upon graduates of PCOM Georgia: osteopathic physicians, physician assistants, pharmacists and biomedical scientists. Many graduates hailed originally from Georgia, and many more continue to live and practice in underserved areas of the state and the surrounding region. Presently, over 800 PCOM alumni practice in the state, their healthcare services impacting 107 counties (most in Gwinnett and surrounding North Georgia areas).

In addition, PCOM Georgia directly and indirectly generates nearly $108 million of economic impact each year in the state of Georgia. PCOM Georgia provides employment for 189 faculty and staff members. An additional 800 jobs are created or supported indirectly as a result of PCOM Georgia’s operational, employee and student spending across the state.

The establishment and mission of PCOM South Georgia

Over the years, the success of PCOM Georgia reinforced the rationale to expand the College’s reach, driving greater impact, particularly into South Georgia. H. William Craver III, DO ’87, FACOS, vice provost and dean, and other PCOM Georgia administrators recognized the need to grow graduate medical education beyond North Georgia and to partner with government, philanthropic and community entities to invest in the next generation of osteopathic physicians and healthcare professionals. Considerable support from legislators, local and regional businesses, healthcare and education stakeholders, and community members in South Georgia underpinned this idea as well.

”As PCOM Georgia continued to expand both its osteopathic and other healthcare related degree programs it became apparent that the South Georgia region did not have the same local access and attention for similar opportunities. With community support already in place, the next phases became obvious.”
– H. William Craver, DO ’87, FACOS, vice provost - Georgia; dean, Georgia osteopathic medicine program; and chief academic officer, PCOM Georgia

Pursuits began to take shape when Jay S. Feldstein, DO ’81, president and chief executive officer, PCOM, and representatives from the South Georgia Medical Education and Research Consortium, a partnership of five independent healthcare systems in South Georgia including Colquitt Regional Medical Center, signed a memorandum of agreement on October 31, 2016. The agreement was to develop a feasibility plan to establish an additional location of PCOM in South Georgia.

Building on the initial framework of the South Georgia Medical Education and Research Consortium and identifying multiple hospitals in the region, PCOM followed the recommendation of Sasaki Associates, Inc., an international consulting firm tasked with choosing the best location in the Southwest Georgia region for a new medical program. With its availability of clerkship opportunities for third- and fourth year medical students, central location, affordable housing and convenience to student services and facilities, Moultrie was a sound choice.

On December 5, 2017, the College received initial approval from its accrediting agency—the American Osteopathic Association’s Commission on Osteopathic College Accreditation (AOA-COCA)—to move forward with the development of PCOM South Georgia. Securing accreditation would require a labor intensive joint effort from College trustees, administrators, faculty, staff and students—from both established campuses. The new location would have to meet all accrediting standards for the institution, undergoing a rigorous and thorough process that would stretch through the summer of 2019 and beyond.

“The accreditation process for PCOM South Georgia proved to be a significant undertaking, as it coincided with the comprehensive AOA-COCA comprehensive review of all three campuses. The review covered all areas of College functioning—from admissions and student services to finances, organization, faculty, research and graduate medical education. The PCOM community responded admirably, providing detailed data that documented PCOM’s high level of excellence in all areas. I am personally grateful to the many faculty, staff, students and board members who contributed to the accreditation effort. As PCOM South Georgia is a new teaching location, the reviews by AOA-COCA will continue through the early years of operations.”
– Robert G. Cuzzolino, EdD, retired vice president for graduate programs and planning

In April 2018, Jeter Partners, LLC, a company owned and operated by brothers Jimmy and Dan Jeter, generously donated a portion of a tract of land, some 31 acres, located in the 2100 block of Tallokas Road near the intersection of Veterans Parkway. A groundbreaking ceremony was held on the site of the new facility on April 26. The start of construction followed.

The 75,000-square-foot facility, which represents an investment of $30 million, was completed in the summer of 2019. The student-centric facility includes expansive classrooms, osteopathic manipulative medicine and anatomy labs, a simulation center, exam and practice rooms, an information commons, study porches and a café. Sasaki Associates, Inc., served as the principal architectural firm, and JCI Contractors of Moultrie served as construction manager.

On June 25, evaluators from the American Osteopathic Association’s Commission on Osteopathic College Accreditation visited PCOM South Georgia. The College was notified on July 12 that all accreditation requirements had been met to begin operations.

Nearly 700 people attended a ribbon-cutting ceremony held on August 6. Georgia Governor Brian Kemp and other dignitaries proclaimed their support of PCOM South Georgia and of the College’s commitment to help grow medical education in Southwest Georgia and to meet the long-term healthcare needs of the region.

“Any time a new physician moves into a community, his or her presence generates not only his or her job but an additional five jobs, a $1.6 million economic impact on the region, and $1.4 million in healthcare savings. So to be able to produce physicians, and to have them here in Georgia and stay here in our state, is exciting for us and will have a tremendous economic impact.”
– Bert Brantley, Chief Operating Officer, Georgia Department of Economic Development 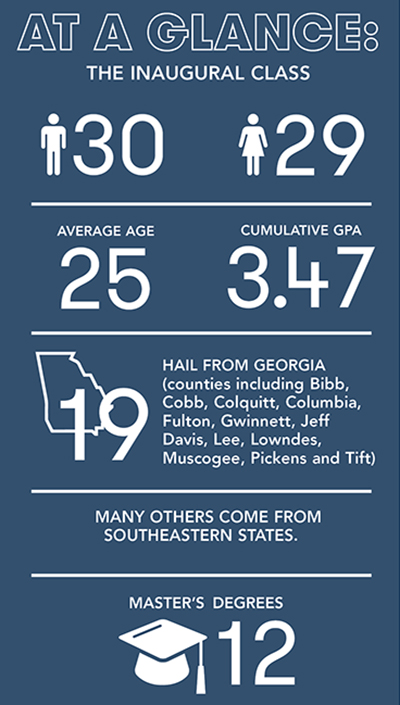 On August 12, a diverse group of 59 DO students began classes at PCOM South Georgia. The inaugural class is made up of approximately half women and half men. Eighteen hail from the state of Georgia. Class members were selected from an applicant pool of over 3,000.

“Deal of the Year” award for PCOM

A partnership with PCOM to build PCOM South Georgia garnered the Moultrie-Colquitt County Development Authority a regional “Deal of the Year” award from the Georgia Economic Developers Association in November 2019. The award was presented to Daniel Dunn, past chair, Moultrie-Colquitt County Development Authority, and Jay S. Feldstein, DO ’81, president and chief executive officer, PCOM.

According to the award nomination form submitted by Darrell Moore, former president of the Colquitt County Development Authority and currently the executive director of the Valdosta State University Center for South Georgia Regional Impact, PCOM South Georgia “will have a transformational impact on medical education and health care throughout South and rural Georgia.”