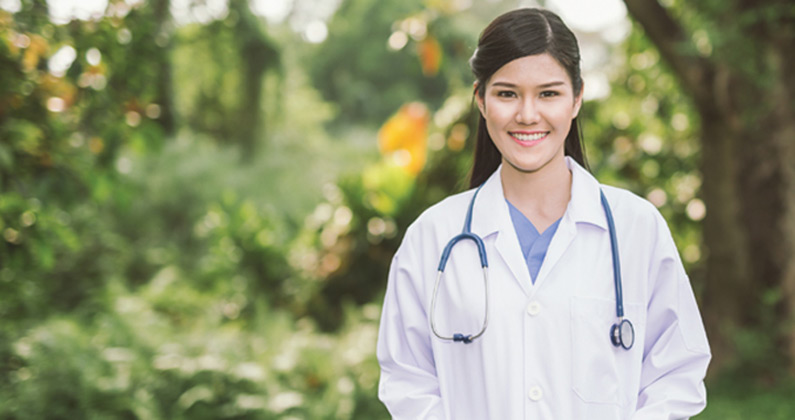 The term “two Georgias” originated as an economic distinction, contrasting the state’s metropolitan areas and its rural communities (108 of Georgia’s 159 counties are defined as rural). But today, it also describes growing and systemic disparities in health and health care. Data from a wide array of sources sketch the picture in numbers; discussions with four PCOM alumni physicians who work in Georgia add shading and texture to a complicated landscape.

Rural Georgians disproportionately experience poor health outcomes—“higher death rates due to heart disease, stroke, cancer and motor vehicle accidents; higher rates of smoking; increased prevalence of chronic conditions such as diabetes; and an epidemic of adverse maternal and child health outcomes, including teen births and low birthweight babies,” according to Gary Nelson, PhD, president of the Healthcare Georgia Foundation. In a 2016 invited editorial in the Journal of the Georgia Public Health Association, Dr. Nelson declared, “There is a significant health penalty for living in rural Georgia.”

Many rural Georgians have limited access to affordable, quality health care. Increasing numbers lack insurance, with an estimated 55 rural counties having uninsured rates above the state average. Aging populations face increased difficulty in traveling for their medical care. Reinforcing these trends: shortages in the healthcare workforce across multiple disciplines.

The need for physicians

The Georgia Board of Health Care Workforce, which tracks physician supply and demand, found 22,471 physicians licensed and actively practicing in Georgia during the period from January 2017 to December 2018. The overall statewide rate of 213.6 physicians per 100,000 population lagged the national average of 301.1. But more critically, the distribution of Georgia’s physicians was profoundly lopsided, with almost half of them taking care of a quarter of the population. Specifically, almost half worked in the top 10 of the state’s 96 Primary Care Service Areas—self-sufficient markets of primary care—which together accounted for 27 percent of Georgia’s population.

In the PSCAs ranked by the Georgia Board of Health Care Workforce at the bottom for physician coverage, Jenkins County in Southeast Georgia and Hancock County in Central Georgia each had a single physician per 100,000 population, and Brooks County in Southern Georgia had three. Their physician rates per 100,000 were about 19, 19, and 12, respectively. By way of comparison, the number one and number two ranked PSCAs in the state, Fulton County (Atlanta Metro) and Lincoln-Columbia-Richmond County (Augusta), both had physician rates of about 460 per 100,000.

Physician shortages are shaped in part by trends in the percentage of doctors nearing retirement age and the proportion of medical residents nearing the end of their education. The Senior List, an online resource of senior care-related information, ranks each state according to its likelihood of experiencing a physician shortfall, in light of these patterns and the current physician workforce in each state. Based primarily on 2016 data, Georgia was ranked the 14th most likely state to see a doctor shortage in the coming years.

In 2017, Georgia’s State Office of Rural Health (SORH), a division of the Georgia Department of Community Health, found that 89 counties did not have enough doctors to treat people living in those areas. Rural Georgians were described as less healthy than those living in urban areas, more likely to be underinsured or uninsured, and more likely to suffer from heart disease, obesity, diabetes and cancer.

The Commonwealth Fund, a private U.S. foundation that supports independent research on healthcare issues, ranked Georgia 42nd in state healthcare system performance in 2019, measured through standardized scores on more than 40 performance indicators in four categories: access and affordability, prevention and treatment, potentially avoidable hospital use and health habits of residents. The report noted that healthcare prices across the state are high and that almost two in five Georgians are considered low income.

Also in 2019, America’s Health Rankings, a project of the United Health Foundation in partnership with the American Public Health Association, ranked Georgia 40th among states, based on a historical and comprehensive set of health, environmental and socioeconomic data. (The five lowest-ranked states were Nevada, Louisiana, Oklahoma, Arkansas and Mississippi.)

The care of women and children

America’s Health Ranking’s 2019 Health of Women and Children Report found that Georgia was one of eight states that saw significant increases in child mortality since 2016. Georgia’s 12 percent increase was double the nationwide increase of six percent.

A 2018 report from the March of Dimes categorized 37 percent of Georgia counties as “maternity care deserts”—areas that lack options for pregnant women. Fifty-eight counties, according to the report, had no obstetric providers or hospitals offering obstetric care. “About 60 percent of all the cases of maternal mortality, meaning women that die as a result of pregnancy and childbirth, are avoidable,” said March of Dimes president Stacey Stewart, because they stem from chronic illnesses such as cardiovascular disease or diabetes that could be managed with proper health care during pregnancy.

Alumni in the trenches:

Valerie Sherrer, MS ’13/Biomed, DO ’17, is completing her residency at Georgia South Family Medicine in Moultrie, Georgia. In June, she’ll join a family practice in Enterprise, Georgia, and care for families she grew up with. “Enterprise and Moultrie both need more doctors, especially family physicians,” says Dr. Sherrer.

Moultrie “is fortunate to have a variety of specialists,” she says, “but for super-specialists, we refer patients to Tallahassee or Macon.” Macon is 2.5–3 hours away and Tallahassee 1.5 hours—but, Dr. Sherrer points out, with the travel time there and back, plus the appointment, “you’re not going to work that day.”

Dr. Sherrer’s Moultrie patients are “hardworking people—migrant workers, farmers, small factory workers. ... We often hear, ‘I can’t get that done because I’d have to take a day off from work and then I can’t feed my family.’ Or they come in with what they think is a cold or a stomach bug, but their blood pressure is 200/120 or their blood sugar is 500. When they leave, we have to make sure they’re set to receive continued care for problems they were not even aware of.”

For most patients in both Moultrie and Enterprise, says Dr. Sherrer, “Paying hundreds of dollars in copays for medicine is not doable.” A truck driver with poorly controlled diabetes “can’t be on insulin, because of his job. He’s trying hard, working with the medications he can afford.”

As a resident, Dr. Sherrer “takes care of moms and their obstetric care and then delivers babies and may take care of them, too, and the baby’s siblings. ... I won’t be doing OB in Enterprise, and I’ll miss it.” But, she says, “I will be taking care of people who knew me as a little girl.”

When Stephanie T. Reese, MS/Biomed ’05, DO ’10, was looking for her first postresidency job, the Mayo Clinic Health System had just opened a campus in Waycross, a Southeast Georgia town. Only one of her colleagues had ever heard of Waycross. “There’s one road in and one road out,” he told her. Dr. Reese worked there in the Division of Primary Care for two years.

“The area didn’t have a lot of coverage,” she recalls. “We were isolated. ... We took on a lot of the indigent care in the area, and most people didn’t have insurance. Or their Medicare insurance might tie them to care in Florida.”

“Effingham’s easternmost area includes Savannah,” Dr. Reese notes, “but the farther west you go, the more rural it is. The hospital where I am on call has 25 beds and a nursing home attached—no ICU. We have limited resources, and very few specialists. ... Some folks with diabetes have to go Waycross for hematology—that’s a three-hour drive.”

Because parents face challenges in getting their children to physicians, “they might work an hour away from where their kids go to school, and they can’t take off.” Dr. Reese helped start Effingham Health TELEMED, the first such program in the Greater Savannah region, which allows elementary school students to be seen a doctor via a live camera. “We did PR in the schools,” says Dr. Reese. “We got teachers and staff involved; we plan to move on to junior high.”

Andrew C. Bowe, MS/Biomed ’03, DO ’07, spent five years as a neonatologist with the Pediatrix Medical Group of Georgia in Macon. In a high-acuity, level 3 neonatal ICU, he cared for babies “with extreme prematurity—22-23 weeks’ gestation—up to full-term infants and those who need mechanical ventilation, nitrous oxide, total body cooling or any type of pediatric surgery.

“The variety and acuity of presentations,” he says, “were similar to what I’d seen before. The biggest difference is that the lack of resources in Central and South Georgia tends to create sicker and more premature babies.”

Dr. Bowe notes that “with premature births, worse outcomes can be related to where you’re born. In an area with poor access to an OB, poor financial resources, we see a lot of families that have difficulties with transportation. Some families have significant language barriers, which tend to play a role in how well a baby does.”

The NICU provided coverage from Valdosta to Milledgeville—“pretty much from the very bottom of Georgia all the way up past the center of the state,” Dr. Bowe explains. There might be a call about a baby born at a hospital with no delivery services. Or a baby needing subspecialist care might arrive from a level 2 NICU. One South Georgia region has no pediatric surgeon, and Dr. Bowe’s group covered a number of their pediatric surgery cases.

At the end of 2019, Dr. Bowe joined Spartanburg Regional Health in South Carolina. In his years at Macon, he saw several families and mothers “a second or third time in the neonatal ICU. So it was extremely rewarding work, but extremely draining. You have to love what you do.”

William D. Stembridge, DO ’12, FACOS, who grew up not far from PCOM Georgia (Suwanee) is a general surgeon at Sterling Physician Group/Colquitt Regional Medical Center in Moultrie, Georgia. He is a vascular and bariatric specialist, but “it feels nice to do a little bit of everything,” he says of his work.

“I might be on call on the weekend and take care of a pediatric surgical patient or a trauma evaluation. It keeps me well rounded. ... We feel like we’re taking care of our community. I know the patients and families; I know all the family physicians who refer to me.“

“Our patients want to receive their care here,” says Dr. Stembridge, “and that drives us to expand our services. For example, we’re adding radiation oncology to our hospital, because patients with cancer don’t want to have to drive somewhere else or move out of town for six months. They want to stay at home.”

About 15 months into his practice, Dr. Stembridge has seen “just about everything that you’d see at a university medical center.” What’s more, he adds, “We take care of a lot of patients who are uninsured or have the most baseline insurance, or don’t know they should have been taking care of something regularly, so they may come in with more advanced stages of disease.”

“Lots of my colleagues,” says Dr. Stembridge, whose residency and fellowship were in New Jersey and Maryland, respectively, “got trained somewhere else, like me, and then came back. We had ties to this town. It’s personal.”