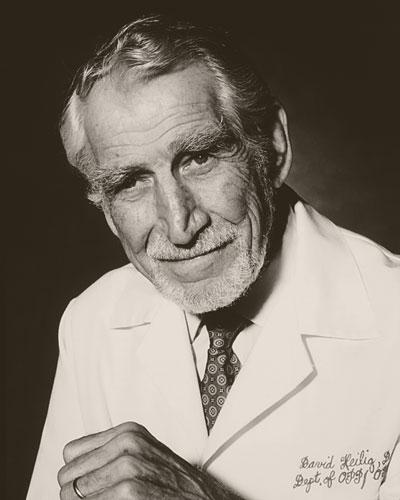 ”Dr. Heilig was my colleague and my mentor. But when I met him for the first time, I was in seventh grade in my T-shirt and tighty-whities, waiting to get my physical for football. Dr. Heilig told me to turn my head to the side and cough. … Basically, because of my father [Nicholas S. Nicholas, DO, FAAO], I grew up with him. He was a really important figure in our lives, kind of like a member of the family. But I could never call him Dave; it was ‘Dr. Dave’ or ‘Doc Dave.’ … I didn’t see him much while I was in medical school. But when my father was hired full-time to chair what’s now the OMM department, the first thing he did was hire Dr. Heilig as his vice chair. That was 1974. And in 1977, I joined the department full-time: it was my father, Dr. Heilig and me. … My father was a very social, extroverted guy—he was a volcano. And if Dr. Heilig had been like him, it wouldn’t have worked. They were opposites; they blended perfectly together. Dr. Heilig was a tectonic plate that moved very quietly. … He was one of the most intelligent, widely educated men I’ve ever met. He was a writer. He could paint and sculpt. He played the cello and bass violin. He was a football player and a diver on the swim team at Swarthmore College. … Dr. Heilig was probably the most deeply thinking osteopathic physician, as well as osteopathic manipulative medicine physician, teaching osteopathic principles and practice. … He was a gentleman and a gentle man—a Quaker, a very spiritual man. I never heard him say anything loud or nasty about anybody. He stood up for his beliefs very strongly, but he did it in a way that was kind and well-thought-out. … Dr. Heilig was what the Myers-Briggs Type Indicator would call an advocate. He helped everybody—he’d put his hands on the students’ hands and take them through the maneuvers. … My father used to say that Dr. Heilig was the greatest manipulative tactician he’d ever seen. And my father was pretty good. … When Dr. Heilig retired, I think that was the only time the American Academy of Osteopathy honored someone with an entire day of lectures, just on him. He was loved by the entire osteopathic profession.”