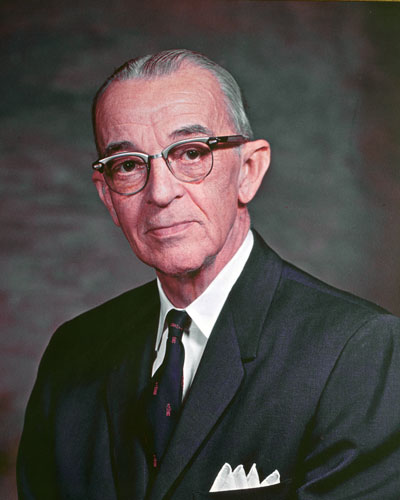 ”Dr. Cathie knew anatomy about as well as any person could, and he taught anatomy about as well as anyone possibly could. He had a distinct love of the profession of osteopathic medicine. … He also had the unbelievable ability to draw anatomic pictures on the blackboard, using multiple colors, with both hands at the same time—while he was also lecturing. … You did hope you would not be called on to participate in a discussion for which you probably would not have the full knowledge he expected. So people were somewhat reticent and would slink back in their chairs during his lectures. … In those days, a group of four or five students worked together on one body. Dr. Cathie would move diligently from table to table, reviewing the anatomy, correcting our impressions, helping in our dissections. He was absolutely superb in that respect. … On the other hand, I recall one situation very early in our program when we were doing the dissection, and he was at the front of the class having lunch. That hit some people in a strange way, and a few had to leave the room. … In the second semester of our junior year, Dr. Cathie taught a class in osteopathic manipulative therapy. Of 100 people in the class, 75 people failed his final exam. Fortunately, I passed, but unfortunately I was the class chairman, and it was incumbent upon me to go down to the dean of the school and say, ‘I remember, from my master’s degree in education, that if an overwhelming majority of your class fails a test, either there was some problem with the test or you didn’t teach it well.’ They then called Dr. Cathie down to discuss the matter with me. And I had to take the onslaught after repeating what I had said to them, but he did agree to give another exam for those 75. I had to withdraw from being the chairman of the class for the rest of the semester, which was about a month or so. But, in retrospect, it didn’t harm me whatsoever, and it did help the class. I think it was the makeup of the test, to be perfectly honest. He was a wonderful teacher.”