A New Framework for Engagement
Unifying the PCOM Alumni Association

In January, following three years of intensive study and discussion, the PCOM Alumni Association Board of Directors approved a new organizational structure for the Association that will provide greater benefits for alumni, students and the College.

The journey toward this new structure began in 2013 during a strategic plan review, led by past Alumni Association president Hal S. Bendit, DO ’84. The Alumni Association Board of Directors began discussions about the role and engagement of the Board and what the Association could and should be doing to support both the College and current students. During these discussions, it became clear that many alumni were confused about the entity to which they were making donations, since they received solicitations from both the Alumni Association and the College. As discussions continued, it was also evident that while the Association did spend donations it received on supporting the College and students, significant dollars were also being spent on maintenance of the separate organizations, including insurance and accounting services.

Institutional Advancement recently conducted a survey of alumni from all programs nationwide for use by the PCOM Alumni Association in developing future initiatives. More than 1,000 responses were received overall. Following are a few highlights of the survey findings:*

A majority of respondents said PCOM should provide opportunities for professional networking with alumni and the College should provide continuing education seminars.

More than 60 percent of alumni who responded said that Association resources should be used for scholarships and student support.

More than 77 percent of alumni expressed an interest in being a mentor. Nearly 70 percent were interested in being a guest speaker for a student club or class.

The Alumni Association will address these and other issues in future meetings.

*Not all respondents answered every question. Percentages relate to those alumni who responded to each particular question mentioned.

The Board voted unanimously to approve the dissolution of the Alumni Association as a separate organization and the integration of the Association as a department of the College as of July 1, 2016. “It became clear that a smaller, more nimble core Board would be better suited to respond to the needs of our alumni and students,” says Dr. Bendit. “In merging with the College, who already supported our efforts through Institutional Advancement, we felt that we could better achieve our goals together versus working as two distinct organizations.”

“With this structure, alumni will know exactly who they are making donations to and what those donations are being used for,” says Dana Shaffer, DO ’85, past president of the Alumni Association during the time of this merger. “Further, the Association Board will have better direction about the things we can and should be doing for the alumni, students and the College.”

In deciding on this new structure, the Association’s Executive Committee spent many hours reviewing bylaw provisions and types of association structures. “Most Association members belong to other alumni associations from undergraduate schools, so they researched how they are organized and shared that information,” notes Dr. Shaffer. It was found that the new Alumni Association model is far more prevalent than the previous one.

The entire Association Board was guided by the book Race for Relevance, by Harrison Coerver and Mary Byers, both experts in association management. “This book is being widely read and used by many osteopathic association boards of directors, and it was helpful to us in recognizing the changes we needed to make to become a more effective and responsive organization,” relates Dr. Shaffer.

After discussing the book, the Executive Committee took input from the Association Board about what the organization could and should do. Based on the Board’s extensive comments, the Committee drafted bylaws to incorporate all those thoughts.

Carrie Collins, JD, chief advancement officer, also served as a resource in developing this new organization to meet more of the ongoing fundraising needs the College will have.

“During the process, we tried to listen and take into account everyone’s concerns,” notes Dr. Shaffer. “We had ongoing discussion and consensus building, and we tried to incorporate minority opinions in the final document.

“In this new paradigm, we wanted to make the Alumni Association Board of Directors a lot more inclusive of all programs—graduate as well as osteopathic,” he emphasizes.

“Our College has diversified with our current programs, and it is important to incorporate all the disciplines to be more involved with the alumni base,” says Darlene Dunay, DO ’83, past president of the Alumni Association, who, during her tenure, oversaw bylaw changes in preparation for the merger.

The new bylaws created a set of Alumni Councils to support all alumni and students from all graduate degree programs on both campuses. This will result in increased Board outreach to alumni and students, creating better programs and services for all.

Four councils were designated, each with representatives from their own specific groups:

“In the past, 95 percent of our discussions at Association Board meetings were related to the DO program, even though we tried to include members from the other graduate degree programs,” relates Dr. Shaffer. “Now the individual Councils can discuss and do work that is appropriate for their particular graduate programs, such as mentoring students, raising money and scholarships for each graduate degree program and providing social events for students in those programs.” 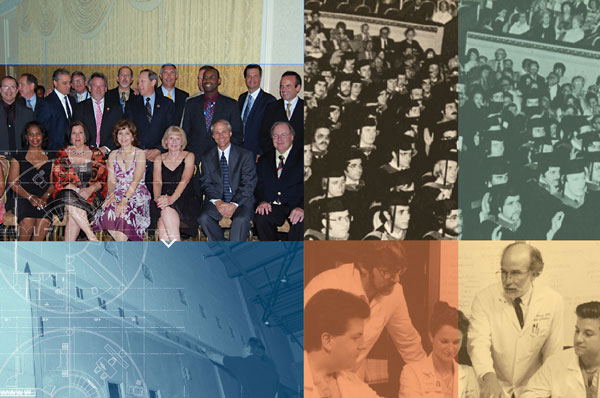 In January, the PCOM Alumni Association Board of Directors approved a new organizational structure that will provide greater benefits for alumni, students and the College.

The Councils first met individually at the Alumni Association’s semi-annual Board meeting in June 2016; they will meet during Board meetings twice a year. “When the Councils meet, they address their own agenda items, then come back together as an entire group to share ideas and report what they would like to do,” explains Dr. Shaffer.

Under the new structure, the Councils seek input from Institutional Advancement when they want to plan an activity that requires financial resources. Then they present the idea to the entire Association Board, who decides how it would best be accomplished.

“This structure will allow the Alumni Association to be more visible and supportive of what alumni do—a greater benefit to the alumni, students and the College,” says Jay S. Feldstein, DO ’81, president and chief executive officer. “We believe the new structure will facilitate stronger communication with the alumni. I applaud the efforts of our Association in developing such an effective new organization.”

The Alumni Association has moved its assets of approximately $694,000 to a newly created endowed fund called the Alumni Association Endowed Activities Fund, which will be managed by the College with the institution’s other donor-funded endowments. Income from the endowment will be used to support the College, and the Alumni Association Board of Directors will make recommendations for its use. In the past, for example, the Association donated $100,000 to each of the Philadelphia and Georgia Campuses for their clinical learning and assessment centers. Recently, $35,000 was donated for renovation of one of the College’s clinics in western Pennsylvania.

“These donations are also helpful to Institutional Advancement staff when they meet with donors,” explains Dr. Shaffer. “Staff can point out that our Alumni Association has already donated to a project or program, which encourages others to donate as well.”

Any future gifts made in support of the Alumni Association, will be added to the principal of the endowed fund. In addition, a new operating budget for the Association will be funded by the College for travel expenses and awards.

“This structure enables the Alumni Association to focus more on its mission, which is helping students and alumni, because they no longer have to be concerned with the business aspects of running the association,” says Pamela Ruoff, MS, executive director, alumni engagement.

“The greatest advantage of the new Association structure is the creation of a better network between students and alumni,” adds Dr. Dunay.

In addition to scholarships, financial support, social events and other programs offered in the past, the Alumni Association hopes to provide more programs and services in the future, including:

“Our main objective is to make the Alumni Association a more efficient organization that is responsive to all alumni and students, and one they can feel proud to belong to,” concludes Dr. Shaffer.

History of the PCOM Alumni Association

On September 8, 1902, graduates of the first classes of Philadelphia College and Infirmary of Osteopathy (PCIO), which would later become known as Philadelphia College of Osteopathic Medicine (PCOM), held a meeting with the idea “to promote the prosperity and extend the influence of Alumni and their Alma Mater, and to encourage a high standard of Osteopathic education and practice.” At that meeting, they formed the Alumni Association and elected officers.

The Association officially incorporated in the State of New Jersey as a non-profit corporation, managed by a representation of a regional group of alumni to serve as officers and members of the Board of Directors.

The Alumni Affairs Office was established on campus.

The Association incorporated in the Commonwealth of Pennsylvania, giving it an increased role in providing financial support for education by starting programs such as the Alumni Student Loan Fund.

The Association gained official representation on the PCOM Boards of Trustees.

Representatives from all graduate degree programs and the student body of the Philadelphia and Georgia campuses were added to the Association Board.

The Alumni Association Board of Directors voted unanimously to merge with PCOM as of July 1, 2016, thus dissolving their 501(c)(3) status. New bylaws created Alumni Councils to represent and support all alumni and students from all graduate degree programs on both campuses. This merger will enable the Alumni Association to fulfill its mission of promoting the interest and welfare of PCOM, and cultivating communication and relationships among all graduates, students, administration, faculty and staff. The Association will focus all of its efforts on engagement and outreach to both students and alumni of all graduate degree programs.