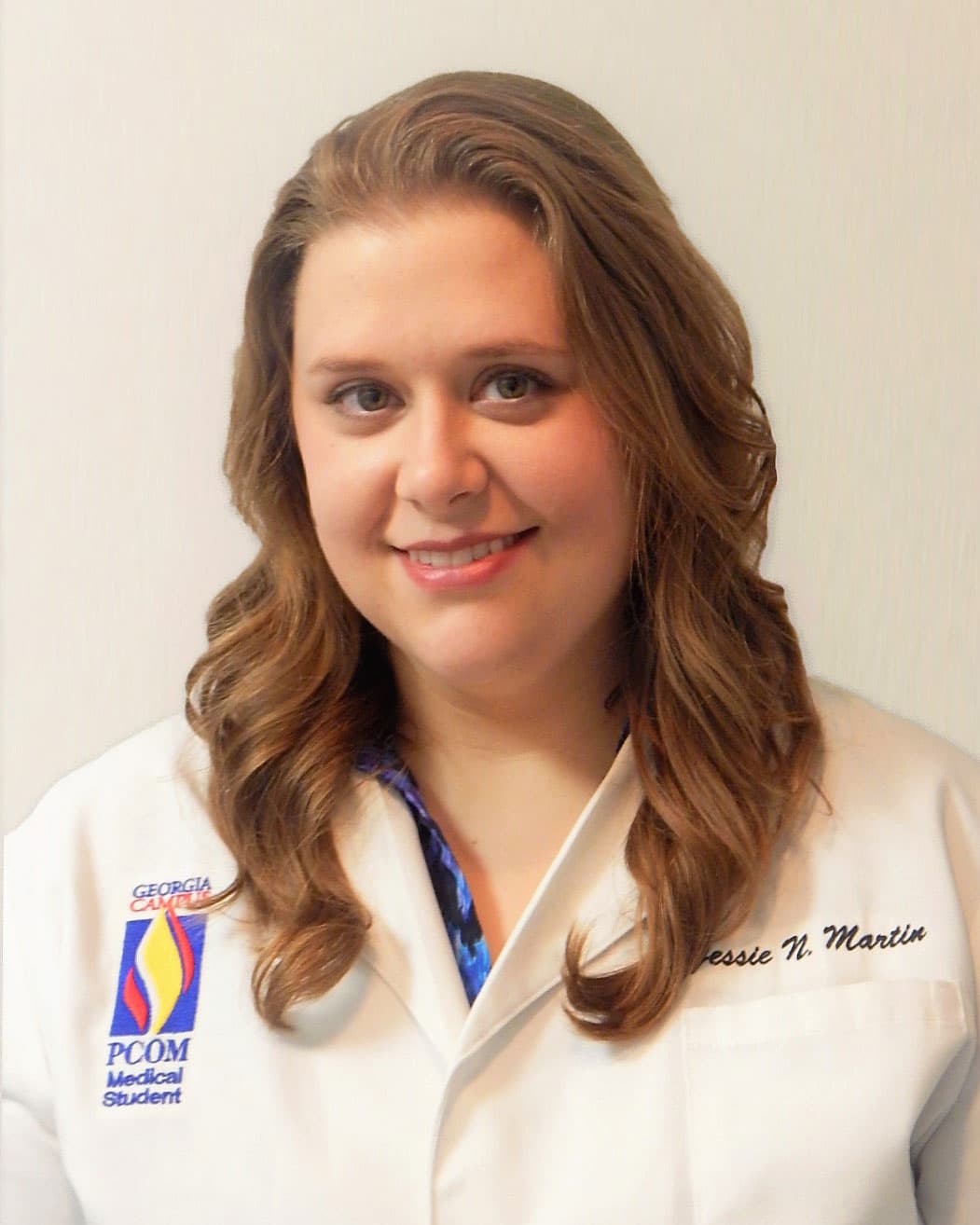 Choosing a career path often takes time, experience, and input from others, along with being attuned to what one enjoys. This proved true for Jessie Martin who graduates from PCOM Georgia as a doctor of osteopathic medicine.

“My enthusiasm for science, especially biology, began at an early age and it grew with time. I still have that same excitement as I learn more and more and am subjected to many experiences in the medical field,” she said.

She recalled a high school biology teacher “who gave me the desire to learn and the confidence to achieve my goal of becoming a physician.”

Around the same time, she was diagnosed with hypothyroidism and was treated by an endocrinologist who helped to alleviate her pain, both physical and emotional.

“He walked me through the functions of my body and the interconnection of the symptoms,” she said. “This experience solidified in me my aspiration of becoming a doctor, a servant, a friend. I cannot imagine myself doing anything else.”

Martin first learned about osteopathic medicine in her undergraduate years. She attended William Carey University in Hattiesburg, Mississippi, which opened a college of osteopathic medicine her freshman year. Her faculty advisor taught anatomy and physiology at the osteopathic college and her mother was a part of the staff at the new medical school. Not only did she meet several osteopathic physicians, but Martin was given the opportunity to join her mother who received osteopathic manipulative treatment at the college’s clinic.

“I appreciated the holistic approach to medicine that the osteopathic profession offers,” she said.

Martin said when she decided to go to medical school, she chose PCOM Georgia due to its location, its reputation and the interview process.

Other factors including PCOM Georgia’s Osteopathic Manipulative Medicine department, which she described as “first-rate,” and the interview process helped her with her decision. “I fell in love with the area and the students were genuinely happy,” she said.

When asked who inspires her, Martin replied that her parents were an immeasurable inspiration.

“They are loving, supportive and kind. Always there to help. I will always be thankful for them for teaching me about God and faith,” she said.

Martin also noted that Italo Subbarao, DO, the current dean of the William Carey College of Osteopathic Medicine, a PCOM graduate, provides inspiration.

She said, “His genuine care for others and his commitment to educating the next generation of physicians is admirable.”

Jessie first met Dr. Subbarao during her undergraduate years and he served as one of her preceptors during her third year of medical school.

“His kindness is contagious and he is one of the most encouraging people I have met. I aspire to be as optimistic and compassionate as a future physician,” she added.

Following graduation, Martin will begin an internal medicine residency at Merit Health Wesley in Hattiesburg on July 1. In the future, she is considering pursuing an infectious disease or critical care medicine fellowship.

She said she chose internal medicine because “it offers the opportunity to provide care and guide treatment in both inpatient and outpatient settings, while also giving me the opportunity to interact with a diversified patient population.”

She added, “This specialty allows for exposure to numerous disorders and diseases of all organ systems of the body,” and provides the freedom to choose subspecialty training.

With a desire to integrate her medical training with her communication skills, she also hopes to use her degree in Spanish in the future.

Through her volunteer and employment experience, she said, “I have developed compassion for people in all circumstances. I want to be a part of their lives. I want to be an advocate of healing and contentment. I want to promote medical education and treatment.”