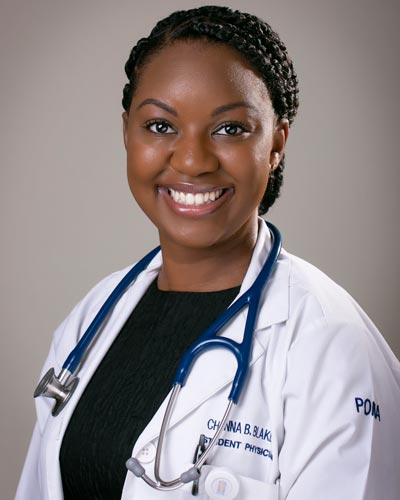 Growing up in inner-city Brooklyn, Channa Blakely (DO ’19) was first introduced to the fast-paced world of medicine through the doctors on TV. It wasn’t until she was a teenager, when her grandmother was hospitalized, and ultimately, passed away due to complications of diabetes, that Blakely saw a side of medicine she’d never seen before.

“My grandmother was one of the strongest people I knew,” she said. “I never saw her cry until I was with her in the hospital. She was experiencing a significant lack of care. Having her bed sore dressings changed left her in tears. It was during this time that I decided that I would pursue medicine, and I would be a better, more caring, doctor.”

When the time came to research medical schools, Ms. Blakely found both osteopathic medicine and PCOM’s mission statement to directly align with her personal beliefs of providing the best, most comprehensive care.

Ms. Blakely says she always knew she had an interest in surgery, but a chance meeting introduced her to the area she would eventually specialize in.

“In my first year at PCOM, I went to the Society of Black Academic Surgeons conference in Columbus, Ohio and met a resident in vascular surgery; I had watched every episode of “Grey’s Anatomy,”’ but I had never heard of [that field],” joked Ms. Blakely. “Given my family history, which included my grandmother’s passing from complications of diabetes and a close aunt’s impending renal failure, I knew I wanted to specialize in diabetes, stroke and hypertension, so vascular surgery seemed like the perfect fit.”

Throughout her time at PCOM, Ms. Blakely, who received her bachelor’s degree in philosophy from Rutgers University, was actively involved in the Society for Vascular Surgery. Being a part of this tightknit community allowed her to meet and learn from professionals working in the field and to gain relevant research experience. She also cited persistence as a factor in her success.

“Since vascular surgery is still an emerging field it is driven by research,” she said. “Since PCOM does not have a vascular surgery program, I had to look to outside institutions to conduct research. I was put in touch with a fellow and attending at the University of Pennsylvania by a contact from the conference I attended in my first year. I knew that I wanted to be a part of what they were studying and I did everything I could to eventually make that possible, including securing a travel scholarship through the Society for Vascular Surgery and becoming cleared to conduct research at University of Pennsylvania. My persistence definitely paid off in the end.”

After graduation, Ms. Blakely will begin her residency at the University of Texas Medical Branch in Galveston, Texas. She will be the first osteopathic physician, the first African American female and the first PCOM alumni to match with this residency.

When asked the one piece of advice she would give students entering medical school, she championed perseverance and added, “If you’re not pursuing medicine for the right reasons, you shouldn’t pursue medicine. There are a lot of challenging times and if it’s not what you really want, you simply won’t make it.”