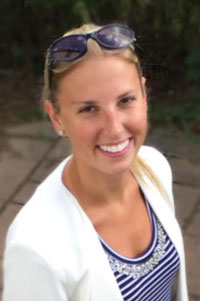 A year ago, Melanie Garthwaite was standing in a field in Tennessee filled with human bodies, studying levels of decomposition. Come December, she will be standing on a stage in Pittsburgh, in a glittering gown. And she wants you to know the two are not mutually exclusive.

“I was contacted through an agency to compete in the 2018 Miss Pennsylvania pageant, and I’ve never competed in any pageants before, so this was a big one to start with,” she says. “But whenever I tell people that I’m in forensic medicine, the response I always get is, ‘Oh, you’re too pretty for that!’ It’s actually quite irritating. So, one of the reasons that I want to do the pageant is to hopefully represent the women in science and medicine and give true meaning to the phrase, ‘brains and beauty.’”

By her own admission, Ms. Garthwaite says she was “a weird kid” who collected animal bones while on walks with her parents, and as a high school student, her favorite courses were all science-related. As an undergraduate at Chestnut Hill College, she switched between majoring in forensic science and biology, before the school decided to combine the two into one degree.

She entered Forensic Medicine program at PCOM in 2015, which eventually lead her to that field of decomposing human bodies, as part of her internship at the Forensic Anthropology Center at the University of Tennessee—Knoxville.

For the past 7 years, Ms. Garthwaite has worked as an emergency medicine technician at Cape Regional Medical Center in New Jersey, but that internship was the first time she’d seen bodies in that setting—about 200 of them, scattered across a two-acre plot behind the University of Tennessee Medical Center.

“It reminded me of Jurassic Park, it was gated off and very private,” she says. “All of the bodies were in different stages of decomposition. You get to see the process from one minute out to completely skeletonized. Studying that process in a natural setting was very helpful for learning how to recover remains, and the proper collection of criminal evidence.”

While she says the emergency room is far more fast-paced than forensic medicine, there is some overlap. “I think going through the forensic medicine program has improved my skills in the ER,” she says. “It trains you to look for little things, and look at a case from a different perspective. Someone can tell you why they’re in the ER, but the clues can tell another story.”

Ms. Garthwaite hopes to investigate crime scene clues one day as a death investigator, examining crime scenes where death appears to have occurred suspiciously. “I really enjoyed the investigation part of my internship at the medical examiner’s office,” she says. “It was good experience. It could be brutal to see the issues that other people face, but it made me appreciate the opportunities that I’ve had. Facing death makes you really appreciate life.”