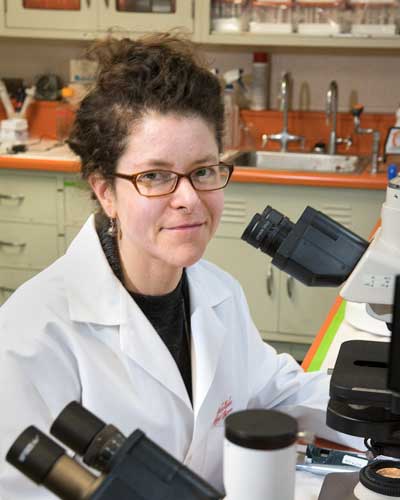 For Corliann Blyn, one of the hardest times in her life also marked a turning point. After spending much of her life as a musician and an artist, Ms. Blyn put those dreams aside to take care of her ailing mother, who was first hospitalized in 2004 for diabetes-related complications.

“I remember riding in the ambulance, thinking I might never see her again. She just wasn’t there,” Ms. Blyn says. “But it was a beautiful thing to watch all these people with their combined knowledge and understanding interpret her body’s signals and come together to bring her back so rapidly.”

Ms. Blyn says it was at that very moment she decided she wanted to pursue a career in the health sciences. However, the path to PCOM was a long and winding one, punctuated with several additional hospitalizations of her mother.

“I worked around that,” she says. “But in the beginning, I didn’t want to leave her alone in the hospital. I saw the need for her to have an advocate. So, I slept in a hallway near the ICU while she was in there, or I would get a cot. My mother couldn’t speak for herself, so someone had to.”

After taking a few biology courses sporadically, Ms. Blyn enrolled fulltime at Rutgers University in 2007, and graduated with her bachelor’s in biology in 2012. But even when she wasn’t fully enrolled in classes, she says she was constantly learning.

“I wanted to learn everything about what was going on at the hospital,” she says. “I was fascinated. In the beginning there was so much I didn’t understand, I would bring in medical textbooks. Whatever the doctors said, I would consume and come back with even more questions.”

One doctor even told her she was learning as fast as his residents. Another asked if he could share her book filled with notes with his students.

“It reinforced my feeling that this was the way I should go,” she says.

As part of her capstone project in the forensic medicine track, Ms. Blyn is currently shadowing pathologists at Children’s Hospital of Philadelphia, spending her days looking into microscopes and learning about different cases from the residents.

“It’s been fascinating,” she says. “It’s amazing to see how resilient children are. I saw a huge tumor that came from a 10-month old, and thought, ‘There’s no way they could survive that.’ And the patient ends up doing just fine. Being here has made me realize that pathology is the place in medicine where I belong.”

Even though her goals have shifted from the artistic to the clinical, Ms. Blyn still sees some overlap. “I thought by pursuing art, I would find my own truth,” she says, “but with that first hospitalization, something said to me, ‘This is more truthful, this is more of what life's about.’ I think I was looking for a connection to humanity with art, but I found it in medicine.”