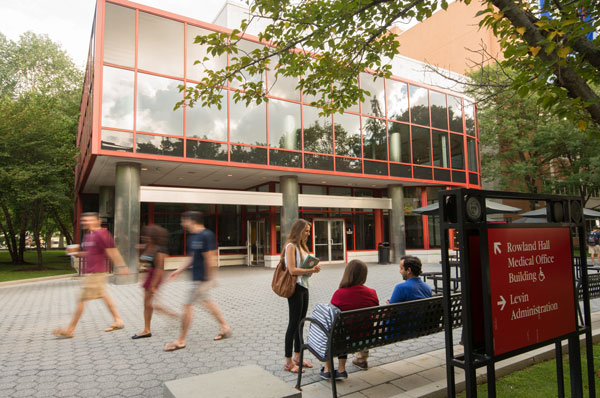 A stigma surrounding issues related to mental health persists among many medical students.

The rates surrounding doctor suicide are staggering: a study in the New England Journal of Medicine found that rates of suicide are 40 percent higher among male doctors, and 130 percent higher among female doctors, versus the general population. Research has shown that these trends can have their beginnings in medical school; as they enter, students have about the same level of mental health as their peers, but by the time they graduate, have higher rates of depression, burnout and other mental illness.

PCOM, like many medical schools, offers several resources for students who are coping with mental health stressors, such as the PASS Mentoring Program, through which DO students are paired with a member of the incoming class to help them transition smoothly into medical school, both academically and personally. Students can also visit the College’s Center for Brief Therapy, or meet with one of the College’s personal support counselors.

However, there persists among many medical students a stigma surrounding issues related to mental health. One study from the University of Michigan at Ann Arbor found that students who exhibited signs of depression felt they were inadequate compared to their classmates.

To mitigate that stigma among PCOM students, alumni Victoria Lawn, DO ’15, Matt Jaffa, DO ’14 and Catherine Babbitt Cook, DO ’14, launched a program in 2012 to help medical students feel safe and supported through sharing their experiences with mental health issues. Now called the Student Wellness and Academic Transition Team Initiative (SWATTI), the program is a DO Council Committee comprising students and faculty committed to the mental health and well-being of all students.

The SWATTI program grew out of a yearly seminar in the Patient Perspectives course block, where DO students shared their own experiences with mental health issues. Many students realized that they shared the same thoughts and feelings with their classmates, said Joe Chiaro (DO ’18), the current chair of SWATTI. “Disclosure is a big help,” he said.

Cierra Lewis (DO ’18) took part in one of these Patient Perspectives panels. “[The panel] helped create this understanding of what it’s like to be anxious and depressed,” she said. “You saw certain people who you’d never suspect that anything was wrong, but we learned the importance of talking about our problems, and not masking those feelings. It was incredibly helpful.” Ms. Lewis says she wants to continue helping her friends and classmates by referring them to the services available on campus.

SWATTI has grown to include a panel discussion for first-year DO students after they take their very first medical school exam, and a celebration marking the end of the Structural Principles of Osteopathic Medicine course block, which Chiaro says can be difficult for some students. “This is the first time many of them are seeing a cadaver, and that can be hard,” he says. “We wanted to make sure those students felt supported by their classmates who had been through it.”

Those involved with SWATTI say they plan to initiate more programming, such as a self-reflective event for third-year DO students, and also want to expand further into the graduate programs as well. “Originally the core focus was DO students, but we found that many of the graduate program students were having similar levels of stress and anxiety as well,” said Chiaro. “We’ve been working to encourage students from all programs to participate. No one is an island here, and we’re all in this together.”