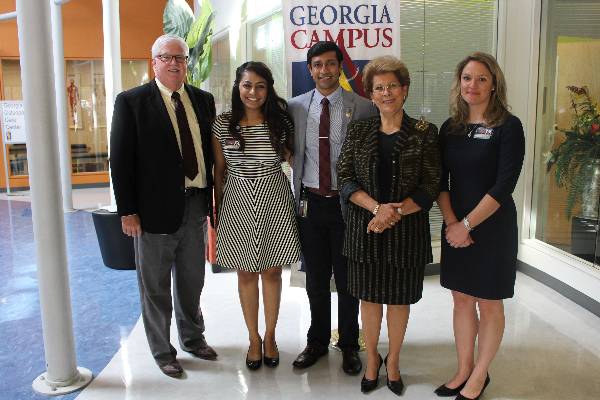 Speaking on the topic, “Health Policy Management in the 21st Century,” she shared healthcare disparity statistics, as well as medical school applicant information to highlight the need for a more diverse group of healthcare professionals. In addition, she issued a warning that in the year 2025, there may not be enough physicians to care for Americans.

Dr. Novello proposes that, “We must do something more to lure the African American male to apply. The Hispanics and the Pacific Islanders are increasing their numbers. My biggest worry is that in the year 2025, the country will have a shortage of 130,000 doctors. Even though the minority doctor numbers are rising, it will not be enough to cover the needs of those who don’t have a primary care provider.”

Dr. Novello recommends that to bolster the number of medical school applicants, medical schools like GA-PCOM “get involved in the teaching of science as early as junior high school instead of waiting to interest high school students in health professions.”

“Obviously the economics are a crucial aspect of why minorities don’t go to medical school,” she said, “but also important is the early training, the role models and the people who believe that they can get to the top of their careers,” she added. “That’s why I feel that my visit to GA-PCOM is on the right track to making this a reality.”

“Service is the rent you pay for living,” she preached to the 150 students who attended the lecture.

Appointed by President George Bush to the Surgeon General position in 1990, Dr. Novello made history by becoming the first woman and the first Hispanic to ever hold this office. Her presentation was made on the Georgia Campus, a partner institution of the Hispanic Association of Colleges and Universities, in honor of Hispanic Heritage Month.

Dr. Novello discussed the top 10 principles she has developed that she gained from friends and circumstances that have helped her along life’s journey. They include:

10) Be a pioneer – don't be afraid to forge into new directions.

9) Do not deny your roots as you walk the ladder of success.

8) Never underestimate your capabilities; others will do it for you.

7) Achieve the highest level of education - it is the key to the door of opportunity.

6) Set goals for yourself and when doing so, make them realistic and then share them with those who believe in you. It's amazing what you can accomplish if you do not care who gets the credit.

5) When you get to the top, don't forget you owe something back to your peers, your family and your community.

4) Don't be afraid to speak your mind.

3) Take care of yourself spiritually, physically and mentally.

2) Never lose your sense of who you really are, even when others believe they know you better than you know yourself.

And 1) Plan big and dream greatness.”

Dr. Novello earned an M.D. degree in 1970 from the University of Puerto Rico. She later completed medical training in nephrology at the University of Michigan where she was the first woman to be named Intern of the Year. Dr. Novello became deputy director of the National Institute of Child Health and Human Development where she focused on pediatric AIDS.

Continuing her work in pediatrics at Georgetown University Hospital, Dr. Novello earned a Master’s degree in public health from Johns Hopkins School of Hygiene and Public Health in 1982. In May 2000, she received a Doctor of Public Health degree. On assignment with the U.S. Senate Committee on Labor and Human Resources, Dr. Novello helped draft legislation for the Organ Transplantation Procurement Act of 1984.

Dr. Novello’s appointment as U.S. Surgeon General came after nearly a decade and a half at the National Institutes of Health, during which time she served 18 months on the U.S. Congress Health committee and was instrumental in drafting national legislation regarding organ transplantation.

She recently retired as the Executive Director of Public Health Policy at Florida Hospital where she was in charge of advocating, translating and implementing public health issues across the board, as well as directing and organizing a lecture series involving medical professionals across the nation.