There’s a Chinese proverb that goes something like this –

DO Council President Daniel Kim (DO ’18) is working to spark more happiness on our campus – similar to “The Happiness Project” movement crossing the country as a result of author Gretchen Rubin’s book by the same name. Kim’s goal is to make Georgia Campus – Philadelphia College of Osteopathic Medicine the best medical school possible by promoting mentorships, wellness activities and a family atmosphere, thus increasing the feeling of well-being and ultimately happiness.

Recently, he presented a video to first and second year DO students which was produced by the Council of Osteopathic Student Government presidents entitled “Happiness Initiative for All Health Professional Students.” The video emphasizes the importance of mental health awareness and achieving happiness. He then led the students through an exercise of demonstrating gratitude by writing a letter to someone who has had a great influence on their lives. The Council will mail these letters on the students’ behalf, along with a note detailing the happiness project on campus. 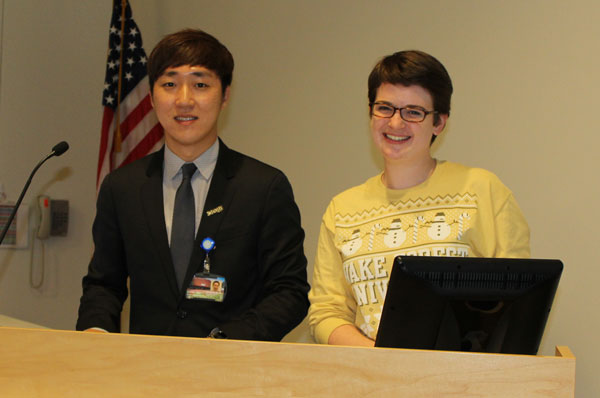 Daniel Kim, with the assistance of Rebecca Alms, presented the happiness initiative to first and second year DO students.

Kim emphasizes that the ultimate goal is to increase the feeling of wellness among medical students and break the stigma of mental health problems, while increasing happiness. He said, “With the United States losing up to 400 physicians each year to suicide and 15 to 30 percent of medical school students nationwide reporting depression symptoms, it is very important that we tackle these issues from their roots.”

He plans to work with the Student Government President at Western University’s College of Osteopathic Medicine of the Pacific-Northwest to bring the MEDWELL Campaign (Mental Health, Exercise, and Diet through Wellness, Engagement and Lifelong Learning) to osteopathic medicine students. The campaign, which features three levels for individuals with varying degrees of health, provides a variety of activities to promote a healthy lifestyle. Hilda Alvarez (PharmD ’18), a student in the School of Pharmacy, is joining with Kim to bring this initiative to pharmacy students as well.

Originally from Texas, Kim is a graduate of the University of Texas at Austin with an undergraduate degree in biochemistry. He chose to come to GA-PCOM because of its location in Atlanta and its affiliation with the Philadelphia campus. The Emergency Medicine Club president, Kim decided to run for DO Council president because he “wanted to do everything I could to make positive changes that benefit the school.”

Thanks to the efforts of our student leaders, we can look forward to activities that boost happiness and well-being on our campus as the movement gains steam in 2016! 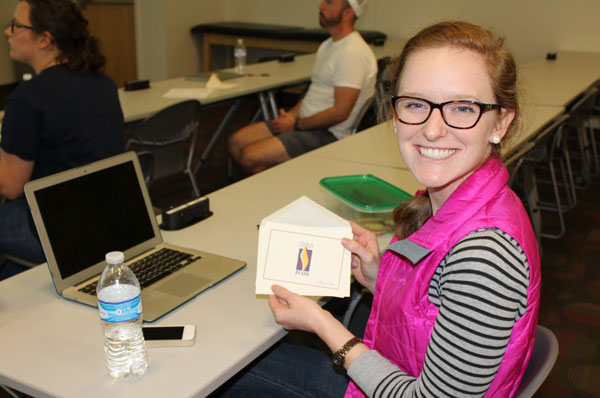 Sarah Coyle (DO '18) takes part in the happiness effort which includes showing gratitude to those who have influenced you through letter writing.