He reported that the Association is also focusing on advocacy for student debt reduction, the upcoming DO Day on Capitol Hill, and the branding efforts underway to educate the public about osteopathic medicine, among many other strategic efforts. The AOA is in Phase 2 of the strategic planning process. “It’s about what we can do to make the future brighter for you,” he said.

Dr. Becher met with student leaders for breakfast and a discussion, and then addressed medical school students at a town hall meeting. He noted that the application for achieving Accreditation Council for Graduate Medical Education (ACGME) accreditation is “arduous” and needs to be streamlined, but announced that five current ACGME programs have applied for osteopathic focus accreditation to date. In two to three years, he predicted, “More than 50 percent of the AOA programs will have completed the application process.” 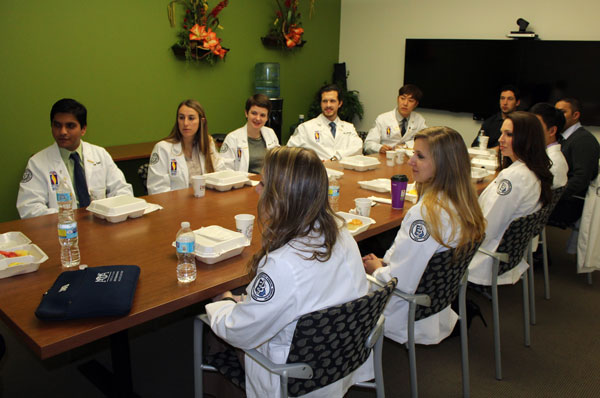 Becher held a breakfast discussion with student leaders during his visit.

He told students that the AOA wants to work with students to reduce debt. In addition, he announced that DO Day on Capitol Hill is set for April 13 in 2016 – in the middle of the Cherry Blossom Festival – and is a great way for students to get to know their legislators.

“We don’t treat symptoms, we treat patients” and “the patient is not just a chart, it’s a person” are two of the messages being relayed by the AOA branding campaign currently underway. Dr. Becher explained that the campaign is multi-year and features the hashtag #DoctorsthatDO.

“The majority of people attracted to the osteopathic profession are younger people who care about their lifestyle,” he said, noting that “osteopathic medicine sets up the opportunity for relationships to develop.” 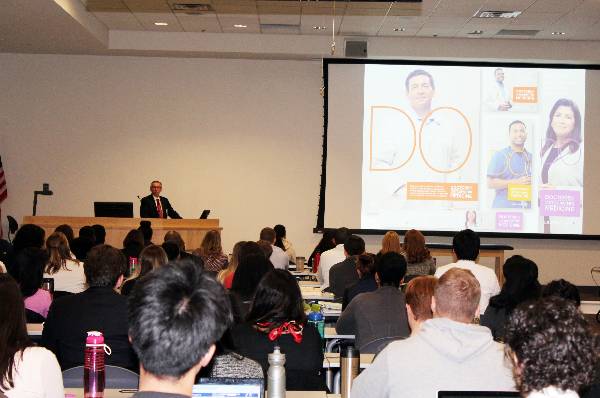 During a town hall meeting, Dr. Becher provided updates on DO Day on Capitol Hill, the AOA's branding efforts and the single accreditation pathway.