Women Who Lead
Seeta Arjun, DO ’00 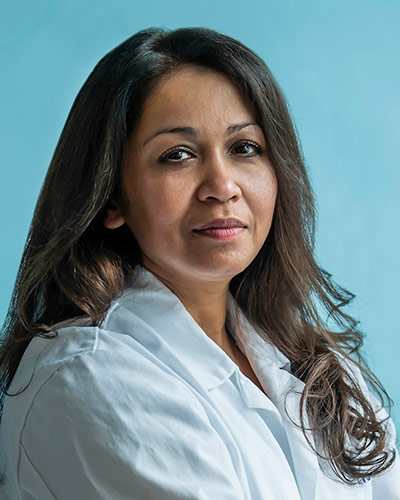 “My mom and sister and I moved to New York from Guyana in 1983 when I was a teenager so that my sister and I could go to college. My mom was a housekeeper, and we were undocumented. ... For as long as I can remember, I wanted to be a doctor. But I had very little understanding of what it was like to be in medical school, and what it really entails to be a physician. PCOM is where I grew up. ... I believe I am the only female minority physician in New Jersey who owns three urgent care facilities. We’ve expanded into primary care too. And I did it singlehandedly; I had no investors or partners. I’ve made a lot of mistakes and learned from them. ... Now I can offer care outside of normal working hours and to patients who have no documentation, or no insurance, or a different skin color. We’re closed just three days a year. ... My mom went back to school and became a home healthcare aide. When she started, she was making $4 an hour, and after 34 years, it’s $15 an hour. She’d get a quarter as a raise. I saw the unfairness in that profession and in others, including the disparities between females and males. With my mother, I’ve founded the Coalition of Minority Women Physicians and Health Care Professionals. We advocate for corporate integrity, transparency and fair dealing. In addition, we advocate for fairness and equality in the workplace, and for wage parity with non-minorities and men at all levels of the profession. The Coalition is also a platform for minority women medical professionals to advocate for the healthcare interests of disadvantaged and financially challenged minority women. ... Women need to join together if we want to maintain ownership of our practices. There’s a very clear systemic bias in the startup process against people who have to begin on a small scale. And so that’s absolutely going to work against generally less well funded people—women and minorities. ... My employees need a paycheck every two weeks. But I also want to fight for minority healthcare workers and physicians. I don’t take no for an answer, and I don’t give up.”