Women Who Lead
Nina Maouelainin, DO ’05 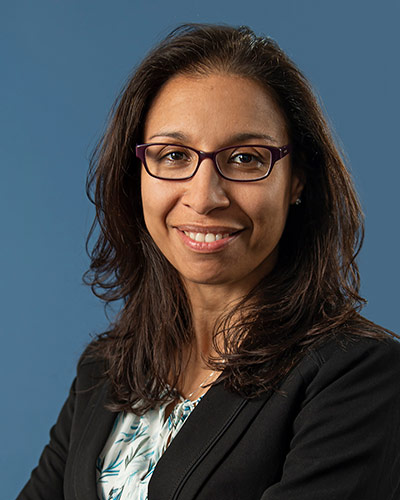 “I was born and raised in Morocco. I went later to study medicine in France, but couldn’t pursue it there because of a quota system. Crazy, right? I never thought in a million years that I’d be judged not based on my achievement or character, but my nationality! ... Madrid’s medical school said they’d take me, so I had to learn Spanish. But then they wouldn’t transfer my credits from France. ‘Europe isn’t the place for me,’ I realized. ‘I want to be somewhere where I’ll never be discriminated against again!’ When I came to Juniata College in 1998, I had never set foot in the States. ... I always considered medicine a passion and a calling. Keep your enthusiasm, do what you want with your life, and then you make a difference. That’s my message. ... When I graduated from PCOM, I had an infant at home, and I decided to go into internal medicine, which was more family oriented. Then I was enthralled by the world of pulmonary/critical care, which in the year 2000 wasn’t considered a women’s specialty. Most of the attendings were male. There were only three female fellows, total, in my class and the classes before and after me. You had to be strong, and you couldn’t take things personally. Even today, you walk into an OR and people are looking around for the men. ... Interventional pulmonology is a specialty in its infancy worldwide, with no more than one new graduate per program. It was a man’s world, like trauma and burn. ... Lung cancer is the number one killer of men and women worldwide! We can now diagnose lung cancer in the periphery of the lungs, at a curable stage 1 and 2. ... When I did interventional pulmonology, I was in the first class of fellows. I would work at night to earn money, and follow my mentor and learn from him during the day. ... The next step is to give back. I joined Carla Lamb [MD] in her endeavor to create Women in Interventional Pulmonology, a group of amazing women who are mentors for others. We have conferences to educate and learn how to take on a leadership role. ... The challenge is not only being a woman but also defending the profession as a whole. I earned an MBA to arm myself; you have to be comfortable in the C-suite. ... My favorite quote is from Winston Churchill: ‘Success is not final, failure is not fatal: it is the courage to continue that counts.’”