Kathleen Ackert (DO ’20) remembers her mother’s laughter as she listened to “The Moth Radio Hour,” the public radio component of live, open-mic storytelling “slams” (competitions) in 29 countries worldwide. “There’s a Moth in Philly,” Ms. Ackert’s mother told her. “You should go.” 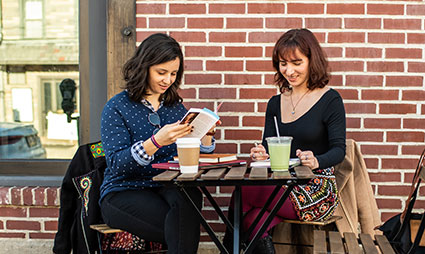 “I first went to the Moth in my M1 year,” Ms. Ackert recalls, “which was a tough time for me.” Soon after, she was not only writing her own stories but performing them, and cajoling PCOM friends to join her. Not everyone at a slam performs; “getting up on stage is the rate-limiting factor,” Ms. Ackert acknowledges with a grin. “But I think that you gain a lot, in different ways, in the act of speaking and in the act of listening.

“There’s something for everyone in narrative medicine,” she says. Developed at Columbia University by Rita Charon, MD, PhD, a general internist and literary scholar, narrative medicine reflects burgeoning interest in the role of the humanities in shaping medicine and medical education.

Ms. Ackert learned during her family medicine rotation that “each patient’s personal narrative is an essential part of the art of doctoring.” She continues, “I’ve had people say to me, ‘You can’t be so sensitive if you’re in medicine.’ Yes, it’s hard to manage your emotions, because you don’t want to burn out. But burnout is being jaded; burnout is when you tell someone that they have cancer and you don’t care. Being empathetic is the antidote.”

PCOM’s Coalition for Healthcare, Humanities, and the Arts (CHHARTS) held the school’s first story slam in October 2017. Participants shared five-minute personal stories centered on the theme of medicine and health care. Brooke Saffren (DO ’20), then president of CHHARTS, says, “The faculty turnout for the story slam was wonderful, with people from different specialties and interests. It’s really inspiring for students to hear moving stories from their professors.” Ms. Ackert and Ms. Saffren both represented PCOM at a citywide medical school story slam sponsored by the College of Physicians in May 2018.

Ms. Saffren’s decision to be a doctor was shaped by observing her father’s treatment for cholangiocarcinoma, the bile duct cancer that would end his life. She has written movingly of “the good, the bad and the ugly” medical care he received from compassionate physicians and from seemingly callous ones. Her time at PCOM has shifted her perspective. Each of her dad’s doctors, she writes, “came into medicine with the intention to heal, and I imagine for each of them the effect of managing chronic illness, watching people’s pain, and not being able to do anything has worn them down in some way. . . . I imagine that after years of practice, it’s beneficial to let a wall build up between you and the awful things that the patient is experiencing. But that’s also how people become despondent and burned out.”

Paint Night, a knitting room, collage and mask making—CHHARTS’ wide-ranging activities are designed to “encourage ‘right-sided’ brain stuff,” says Ms. Saffren. “Everyone is type A in med school—and I’m including myself! Using that part of our academic side that’s not just core science feels good for a lot of people.”

CHHARTS’ advisor is PCOM Counselor Ruth Conboy, DNP, LPC, who is completing a Certification of Professional Achievement in Narrative Medicine at Columbia University. She incorporates the arts into many of her service and program offerings. In an hour-long wellness workshop for third-year medical students, for example, students read poems by Glenn Colquhoun, MD, whose work Dr. Conboy discovered in Tools of the Trade: Poems for New Doctors, provided to all graduating PCOM DO students last year by Murray Zedick (DO ’62). The students respond to two poems: “Today I Want to Be a Doctor” and “Today I Don’t Want to Be a Doctor.” She uses reflective writing in support groups as well.

Last year, the first in a planned annual art contest at PCOM drew almost 100 participants. Dr. Conboy is excited about an upcoming pilot initiative sponsored by the Barnes Foundation, the renowned Philadelphia art collection, and funded by its Weintraub Fund. In four sessions, twenty first-year DO students will participate in exercises in the Barnes galleries that will focus their attention on close observation, communication and critical thinking skills that are essential in the medical field. Similar classes take place in medical schools around the country.

During orientation, DO, PA and BioMed students complete a Post-it that identifies them as a PCOM student—and as something else. Dr. Conboy says, “It could be, ‘I’m a mother, I’m a dog lover, I’m an artist, I’m a soccer player.’ They know it when they come in, but they forget what else they are, because they get so engrossed in their studies. I’ve had students come to my office, months after being here, and say, ‘I don’t know myself anymore. All I do is study.’ And now I can say, ‘What did you put on that Post-it?’ We try to help them hold on to those parts of their personhood that were important before.”