Stricken with a degenerative eye disease at age 12, Jeffrey Gazzara, DO ’16, didn’t let vision loss stop his academic pursuits; he earned a bachelor’s degree at the University of Pennsylvania, and then his doctor of osteopathic medicine degree at Philadelphia College of Osteopathic Medicine.

Dr. Gazzara began his residency in neuromusculoskeletal medicine this past summer at Mercy Health Muskegon, in Muskegon, Michigan. It’s the training he’ll need to become a practitioner in osteopathic manual manipulation three or four years down the road. 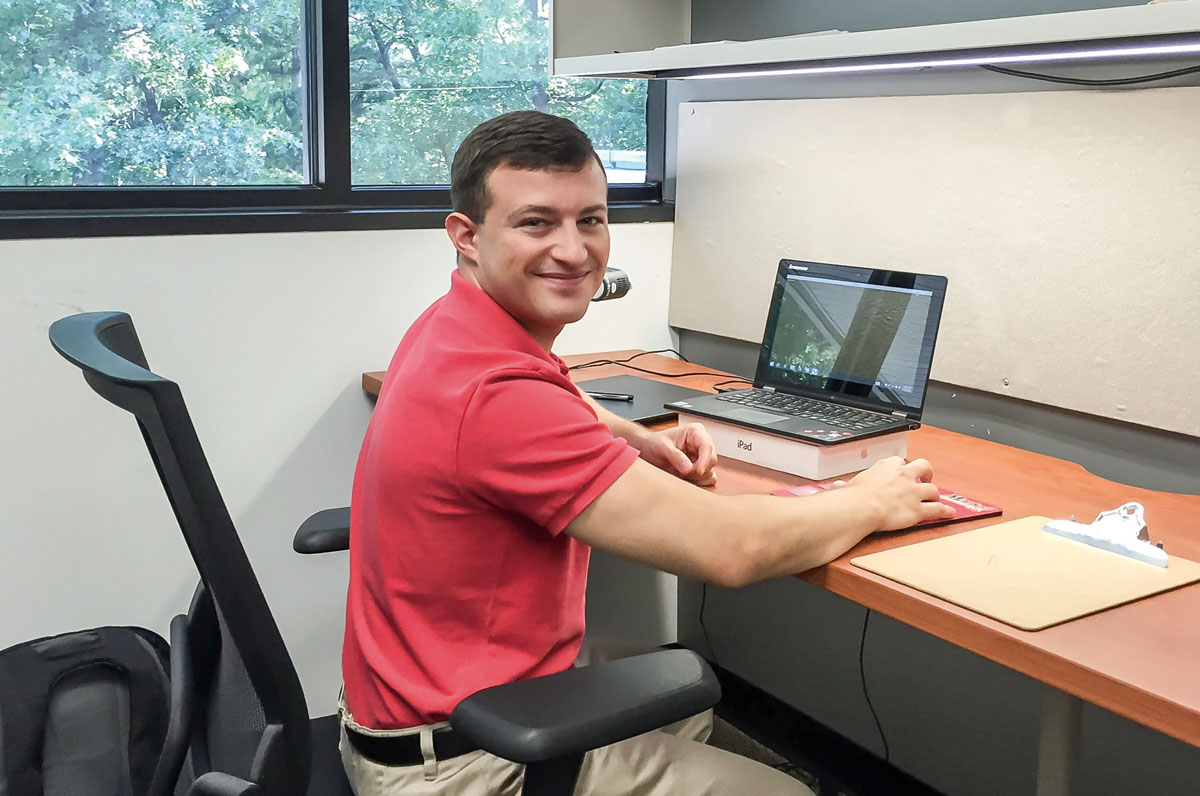 Jeffrey Gazzara, DO ’16, has adapted to and overcome many of the complexities of practicing medicine with a visual deficiency through the power of touch and cognition.

“I’m still trying to decide if I’ll do an extra year in sports medicine, but if not, I would love to have a small practice, working on my own, and practicing osteopathic manipulative medicine,” he says.

Dr. Gazzara suffers from retinitis pigmentosa, which causes vision loss through the degeneration of the retina’s rod photoreceptor cells. It wasn’t a huge problem for Dr. Gazzara in high school, who ran the 100-meter dash on the track team and played running back on the football squad. But the degeneration began to take its toll on Dr. Gazzara’s eyesight during his undergraduate years in Philadelphia. It hasn’t been easy.

Dr. Gazzara kept pace using certain accommodations, such as a computer program that reverses the screen, with white letters on a black backdrop. The program also has a bigger blinking mouse to provide added visual assistance.

While on clinical rotations at PCOM, Dr. Gazzara needed to link his computer software to the electronic medical records system at each hospital so he could both read and input patient notes on his laptop. Dr. Gazzara says he would call ahead when he started a new rotation so he could visit the office to learn how it was set up. He’d take a trial run on the bus as well, to get his bearings.

Dr. Gazzara was recently featured in the American Osteopathic Association’s magazine, The DO, in which he discussed his journey through medical school while legally blind. When one online reader commented that she was struggling through her preclinical years at medical school, he offered her the advice about the strategies he relied on at PCOM.

Listening, it turned out, was the key, as he sharpened his auditory skills.

“I’m learning new techniques, so I’ll have more in my toolbox,” he says. “There are things you can do with your hands to make people feel better. The practice can be so gratifying.”

“When I began my first year of medical school, I tried to do too much,” he wrote. “I bogged myself down. Eventually, I had to convince myself to do less. I literally just listened to lectures and memorized. I would listen to each one twice before each exam. You really have to ask yourself: ‘Am I am auditory learner or a visual learner?’ Then create a study method so you can best learn.”

When he began medical school, Dr. Gazzara had ruled out surgery as a specialty upon graduation. By his final year, he was leaning toward the field of physical medicine and rehabilitation. But as time approached for him to choose his residency, he decided to become a specialist in OMM.

“I had a change of heart, and was driven to what I really wanted to do,” he says.

His study of medicine, and OMM in particular, has honed his sense of touch. His hands help him see what’s beneath the skin. By interpreting sensory output, he “sees” health.

“This field was perfect for my vision,” he says. “When you are doing a physical exam, people who have vision take it for granted. But when you listen to a patient’s heart and lungs, it has nothing to do with seeing. The same applies to an abdominal exam; you can feel that there’s a lesion by running your hands over the belly. You can put a hand on, and feel it.”

During his residency, Dr. Gazzara looks forward to learning new ways to see—and to heal—with his hands.

“I’m learning new techniques, so I’ll have more in my toolbox,” he says. “There are things you can do with your hands to make people feel better. The practice can be so gratifying.”

Paul Dyball, DO, who supervises the OMM residency program at Mercy Health Muskegon, reports that Dr. Gazzara has received good reviews from both attending physicians and his patients. “We’ve been blown away by how well he has managed,” says Dr. Dyball. “People who interact with him say Dr. Gazzara puts their concerns at ease, both with his demeanor and medical knowledge.”

Dr. Gazzara, who grew up in South Jersey, was nervous about moving to Michigan, having stayed close to home throughout his upbringing and college years in Philadelphia. He feared he would be homesick. He feared he’d have to justify himself to Michigan naysayers, like some he met out in the Philadelphia healthcare world, who didn’t think he could make it because his vision was impaired.

But Michigan has turned out to be a most pleasant surprise.

“Michigan has been great,” he says. “The people are so nice. I’ve got a girlfriend. Nobody gives me any trouble. I’ve found that I can do it. I just have to do it a little differently.”