Jack Kelly, DO ’85
PCOM Heroes of the Front Line 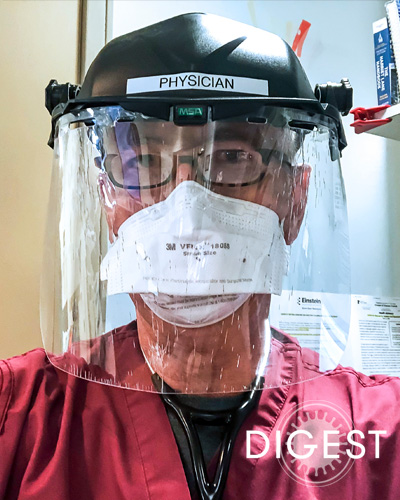 “I’d seen hundreds of viral influenza-like illness patients since late February. On March 16, as I finished my shift and came home, I felt utterly exhausted. My body ached. My nose was stuffy. My temperature was 99.1 I felt better after taking Motrin. But my lethargy and aches continued for five days; I had no cough, no diarrhea. My temperature remained at 99. … On March 21, I called my primary care doc and had a viral panel drawn and a COVID-19 test. My test was sent three states away. (I didn’t get my results until seven days later. The test was positive.) … A day later, on March 22, I became dramatically ill with severe shakes and rigors. My wife [Fran Sirico-Kelly, DO ’87] listened to my lungs. ‘You have crackles in your left lung base,’ she declared. ‘Your heart rate is 105 and pulse oximeter is 91 percent. You are going to the hospital.’ That night, two of my emergency medicine colleagues examined me in the ER. They found bilateral ground-glass infiltrates and a left lower lobe pneumonia. But my oxygen saturation was 96 percent and I really did not meet criteria for admission. They gave me IV antibiotics and a Z-Pak. ‘I think I can tough it out at home,’ I said. … I self-quarantined in our guest bedroom. My wife delivered food and medicine to the upstairs landing. It was one of the darkest, most awful periods in my life. The viral symptoms were brutal: severe body aches, no energy at all. Every breath, associated with dull central chest achiness, was hard work. When I developed shakes and rigors, I’d burrow under five blankets to cope. … Every day got worse. I would check my vitals and send pictures to my wife so we could map out the clinical course. Her anxiety was high. She worried if she would find me alive in the morning. … I was alone. It was my personal struggle. Each day, my wife would make me a double cappuccino and freshly baked muffin (her way of cheering me up). I’d shave and shower off 24 hours of viral sweat. I still felt weak and dizzy. … It took eight days before my temperature stayed normal. By April 1, I’d lost 10 pounds along with strength and resilience. Each day, I began to feel better. I began to take two-mile walks with my wife, and I resumed strength training. … I went back to work Easter morning. It was my personal resurrection victory. … Now I’m three weeks’ post-quarantine and have regained all my strength. I’ve gained back six pounds. My heart rate, which was sustained for some time between 100-105 beats per minute, finally returned to the 65-70 beats per minute that I’m used to. There are so many COVID-19 patients coming into the ER. And I’m back in the game, working with my ER team.”