When Winson T. George, PhD, DO ’09, was growing up in Bombay, India, he knew nothing of the city’s lurid red light district, located about eight miles from his childhood home.

Decades later, Dr. George has joined a cadre of Western professionals who travel to the city, now called Mumbai, for weeklong medical missions. They volunteer to treat hundreds of patients who throng the Bombay Teen Challenge’s medical tent, set up on a street in the heart of the Kamathipura neighborhood, the home of the city’s sex trade since the British colonial days in the 19th century.

It’s a squalid life for the young women lured to the brothels as they struggle to overcome a host of medical and mental-health issues. An estimated 70 percent carry the HIV virus. 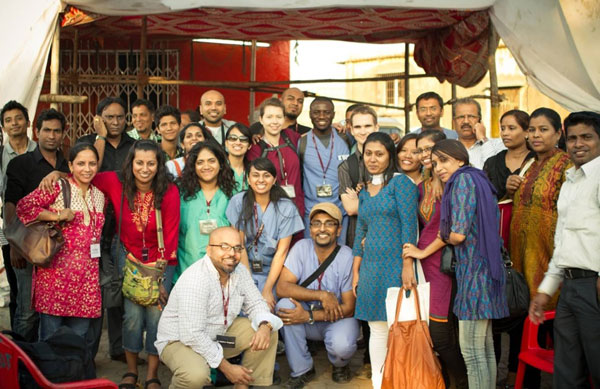 Dr. George is headed back this spring for his third trip since 2012. “Our medical outreach is a way to encounter sex workers and their children, and allows us a foot into the door of their lives,” says Dr. George, whose family emigrated to Rockland County in New York City’s northern suburbs when he was six. “Compassionate care has earned us credibility, and the girls see us as a valuable asset. And through our relationships, we’re able to begin to change their hearts.”

Dr. George, who works in the Bryn Mawr Family Practice at Main Line Health Center in Broomall, Pennsylvania, also serves as a faculty member with the center’s medical residency program, where he received his training. The dually accredited program takes four residents a year—two from osteopathic medical schools and two from allopathic medical schools.

One of the program’s third-year residents, Timothy Mack, DO ’12, will accompany Dr. George on his 2015 mission. He knows what to expect. Dr. Mack traveled on a medical mission to Recife, Brazil, in his final year at PCOM in 2012.

“It’s going to be serious work,” says Dr. Mack, who grew up in West Chester, Pennsylvania, and has accepted a position with Main Line Health Care in 2015. “We’re going to see some scary stuff. It will be ‘follow-the-leader and see where I can help.’”

The free health services in the medical tent augment the health care delivered by the lone staff physician at Bombay Teen Challenge, a Christian-based agency founded in the early 1980s to address the needs of the sex workers and rescue some of them from what has been called 21st-century slavery. Dr. George’s sister and brother-in-law, Leena and Tom Varghese, both work for BTC.

For Dr. George, his work in Mumbai is part of a family medical practice that is grounded in the relationships he develops with his patients. He now hopes to make it an annual event with his medical residents at the Bryn Mawr Family Practice.

“An international experience like this reminds you of the heart of family medicine,” says Dr. George, who lives in Fort Washington, Pennsylvania, with his wife and three children. “It opens you up to the needs of the underserved in your own community. There’s human trafficking in the United States as well.”

Patients who come to the free medical tent present with a broad range of diseases. Many of the sex workers suffer from sexually transmitted diseases, joint pain and mental- health issues associated with their plight.

“You see how traumatized these girls are when you look into their eyes,” he says. “They are soulless. They’ve been exploited, raped, broken in so many ways. This is all they know. And that’s where Bombay Teen Challenge enters in, to show them avenues for change.”

Dr. George was not headed for medical school when he graduated with an undergraduate degree in engineering from Rensselaer Polytechnic Institute in 2000. He went on to earn a doctorate at RPI in biomedical engineering in 2005, planning at the time to pursue a career in academia, focusing on the science involved in bone fractures.

But then he decided to dive into medicine. He had an idea that a career in orthopedic surgery would satisfy his desire to become a healer.

“It seemed absurd to consider medical schools and accrue more student loans,” he says. “But I was interested in medicine. I applied.” On the day he celebrated his doctoral degree at RPI’s graduation ceremonies, he received his acceptance from PCOM.

“I had liked what I’d heard about the osteopathic principles,” he recalls. “And my medical practice, in many ways, has ended up being an extension of my engineering career.”

During his doctoral studies, Dr. George had delved deeply into biomechanics, which provided a firm foundation for the practice of osteopathic manual manipulation. “I understood the relationships between structure and function,” he says. “And those concepts apply to many medical issues.”

It turned out, however, that family practice, not orthopedics, would become Dr. George’s specialty. His residency in family medicine at Bryn Mawr Family Practice solidified this change.

“As much as I grew up studying the science of medicine, I became drawn to the art of medicine, the relationship side of the holistic treatment of patients,” he recalls. “I fell in love with family medicine, where you get to do everything.”

He brings that same approach to the streets of Mumbai. “It’s not just the medical side; there’s the bio-psycho-social side that needs to be addressed,” he says. “When we intervene, we can help change the life trajectory for those children.”