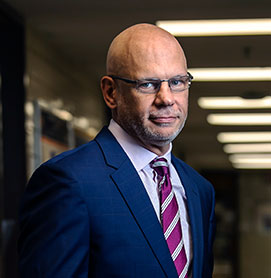 “Two days into my residency with the Philadelphia medical examiner’s office, I was hooked. I ended up working there as an assistant medical examiner from 1992 to 2008. It was overwhelming. We had four pathologists for the entire city. I was doing five or six autopsies a day in addition to testifying in homicide cases. We were understaffed and underfunded. For many years I’d bring my scrubs home to wash. I was getting carpel tunnel syndrome. Part of the problem was financial, too. It wasn’t viable to continue staying there.  . . . When you are doing cases, you have to put your emotions aside. You have to be objective. It can take a toll. You are human.  . . .When my two sons were young, there was a case involving my son’s friend, who was killed by a hit-and-run driver. I recused myself from the autopsy. But I was there. My kids always knew when I had a bad day, like when I had a case with a kid who was beaten to death. I would stop at Toys ‘R’ Us on my way home and buy a couple of presents for them.  . . . I started working at PCOM in 2002, to develop the master’s program in forensic medicine. I progressively made the transition from full-time pathologist, to part-time coroner and teacher and administrator.  . . . I like to keep my hand in forensics with the Montgomery County Coroner’s Office. I do autopsies and testify in cases. It gives me skin in the game. That lets me allow students to shadow me while I’m doing an autopsy. I like giving testimony in court. I’ve done it more than 800 times. You have some very sharp, aggressive attorneys who find every little problem with your autopsy report. You have to maintain a calm demeanor, no matter how aggressive they get. You remain professional. You have to stick to your guns.  . . . It’s great being challenged by my students. I’ve done more than 8,000 autopsies. It may seem commonplace to me, but it’s refreshing to teach it, to go in on a basic level, and then to see a light bulb go off when you see the students make the connections.  . . . I’ve found that practicing martial arts is a great stress reliever. I’m training for my black belt in Krav Maga, an Israeli martial art. It gets you thinking in a different way. It’s a great workout. It gets your heart rate up and scares you a little bit. It gives you clarity; but the art is still very cerebral. I can’t be worrying about my phone bill when someone is about to punch me in the face.”