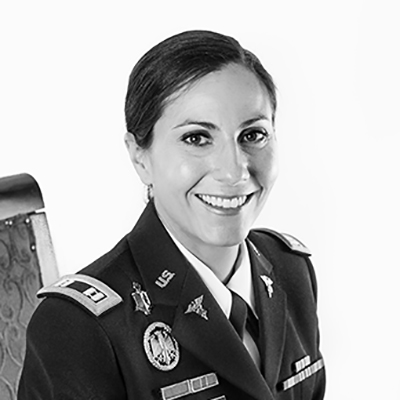 “My family has an extensive military service history. My dad, uncle and brother are retired Air Force; my grandfather was in the Army; and my great-grandmother was among the first women to serve in the Navy. . . . In 2006, while I was working to complete my master’s degree in athletic counseling, I met a soldier who had just returned from Iraq. He told me about his problems reintegrating back home. I decided I wanted to help service members who are at risk for mental health disorders. I eventually decided to return to school to study clinical psychology. . . . I enjoy the challenge of my career. I find satisfaction in helping people, many of whom have had to do and see things that no human beings should have to experience. Many servicemembers who suffer from post-traumatic stress disorder have a hard time readjusting when they return home from a conflict; some find it challenging to live their lives the way they would like and have difficulty reintegrating with their families. Through the use of evidence-based treatments, I’ve been able to help reduce and even eliminate my patients’ symptoms. . . . I’ve made a commitment to five years in the U.S. Army as a commissioned officer. On my first day, I was awarded the rank of Captain. It was a little nerve-wracking to start out with such a rank—without knowing all the military customs and courtesies. . . . I am currently completing my training at Brooke Army Medical Center. When my training is finished, I will be a behavioral health officer, which means I’ll be attached to a unit. If that unit deploys, I’ll deploy with them. . . . I’ve been able to complete a variety of trainings within the Army, one being with the aviation community. I also attended training on the reintegration of both military and civilian isolated personnel. I learned about the psychology of captivity and the reintegration process. It is a privilege and honor to be counted among the few who have been able to complete such training and be qualified to help others during a great time of need.”