Bringing Hope and Care to Ukrainians

For decades, Zenia Chernyk, DO ’77, has been a remarkably efficient advocate for Ukrainian children with specialized healthcare needs. Working with Ukraine’s embassy and government, the U.S. Congress, and her sprawling personal network of organizations and individuals throughout the Philadelphia area, the United States, and abroad, she has brought scores of children to this country for treatments that would be impossible for them to receive at home, and has enabled treatments to be provided for many others in their home country. 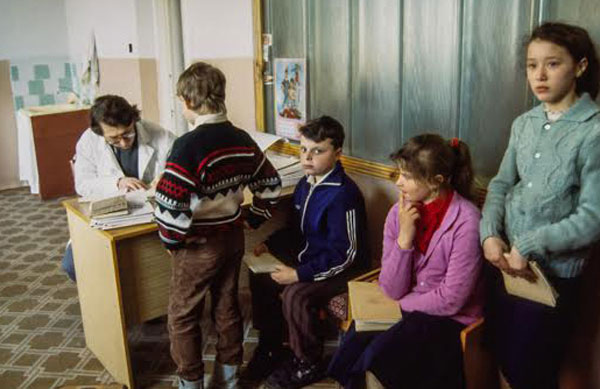 The fulcrum of Dr. Chernyk’s work is the Ukrainian Federation of America (UFA), a Jenkintown, Pennsylvania–based nonprofit organization staffed entirely by volunteers and, with the exception of an occasional government grant, run exclusively on donations (and through the old-fashioned efforts of carnivals, fashion shows and similar fundraisers). Dr. Chernyk is president of the UFA and is serving a second term as chair of its board of directors, of which she has been a member since the organization’s founding in 1991. She directs the UFA healthcare program; it also has vigorous programs in advocacy and information, arts and culture, education, humanitarian aid, and social services, each developed and run by its own director. For example, the UFA has “the largest Ukrainian social service program in the Philadelphia area for new immigrants,” Dr. Chernyk says. The Philadelphia area has about 180,000 Ukrainians, most densely concentrated in the Northeast section of the city.

The logistics of helping Ukrainian children with serious healthcare problems are daunting, even after the best course of treatment has been determined. “The children who come to the United States may need chemotherapy; they may need repeated surgery,” says Dr. Chernyk. Some stay in this country for up to a year, and host families must be found to accommodate them. Obtaining visas for the Ukrainians requires satisfying the U.S. Embassy in Ukraine that the UFA assumes financial responsibility for the costs of the child’s (and accompanying family members’) entire visit. Treatments are secured in advance by reaching agreements with hospitals to offer their services pro bono. Dr. Chernyk sets the wheels in motion by reaching out to her network of colleagues and their associated hospital administrations. (Besides Philadelphia, UFA-sponsored children are currently patients in Cleveland, Washington, DC, and Boston; the locations vary with the children’s needs and the healthcare providers’ availability.)

The UFA’s healthcare program treats approximately 20 children annually, though the number fluctuates from year to year. Dr. Chernyk travels to Ukraine annually or every other year with a team of doctors to perform surgical procedures on a dozen or more children, performing consultations and evaluations on as many as 30 additional children. On average, the UFA reviews between two and 10 cases daily and, even for children it does not treat, offers recommendations to their families and doctors in Ukraine.

Many of the children who are helped by the UFA have a family member in the United States who obtains information that a child “has an illness that is difficult or can’t be diagnosed, or has no money for chemotherapy, or cannot obtain the surgery they need at home, perhaps because the available technology is too limited,” Dr. Chernyk explains. “We get medical records from the treating physician. We translate them into English and contact a specialist in the right area. We determine whether we can treat the child’s condition in an alternative or more appropriate way, a way that’s easier for the child to tolerate.” In a small number of cases, the medical review determines that available treatment would not differ if the child were to come to the United States. In the other cases, the family is notified that their child can be brought to this country, or can be supplied with medicines at home. In some instances, if a child can’t be safely moved—for instance, a child with a brain tumor—the UFA arranges for U.S. doctors to travel to Ukraine and treat the child there.

The UFA healthcare program also reviews prenatal cases, studying ultrasound images to determine whether there may be a preexisting congenital anomaly. For example, if a parent was heavily exposed to Chernobyl radiation, even if not directly, there may have been a genetic mutation. Dr. Chernyk says that children may be born with two heart chambers, missing limbs, spina bifida, prune belly disease, cleft palate or other anomalies.

Besides providing its invaluable assistance to individual Ukrainian children, the UFA healthcare program operates a variety of long-term programs. One such program is “Nasha Rodyna” (Our Family), which since 2008 has sponsored an annual two-week summer camp in the Carpathian Mountains for children with multiple sclerosis and their families. This area in Western Ukraine has an unusually high incidence of MS. Two U.S. physiatrists run the camp, which treats between 11 and 17 children each summer, providing medication for them and support and counseling for their parents. Nasha Rodyna also connects Ukraine to the MS International Federation, works to establish an MS research center, obtains wheelchairs and hospital beds, helps finance hospital supplies, develops and implements training programs to care for MS patients, and assigns social workers to families of MS patients.

The UFA has also been a partner—with the International Fund Ukraine 3000 and the Ministry of Health of Ukraine—in Project Lifeline, a healthcare initiative focusing on Ukrainian children and adolescents. Working with institutions in the United States, Ukraine and around the world, Project Lifeline provides healthcare professionals with a teleconference education and information network. It also helps laboratories, clinics and hospitals with equipment maintenance, medical supplies, and the standardization of procedures and inspections, as well as social service, counseling and drug rehabilitation for a range of diseases. Epidemiology efforts include screening, genetic testing, database management, and disease tracking (funded by the U.S. Department of Defense).

A new undertaking of the healthcare program involves upper-extremity prosthetics. Ukrainian prosthetists will come to Shriners Hospitals for Children to learn how to make light, durable prostheses and how to prepare limbs for the devices. “Lower-extremity prostheses in Ukraine are fairly adequate, if not optimal,” says Dr. Chernyk. “But they feel they need to improve the functionality of hand and arm prostheses.”

The UFA was founded, shortly after Ukraine became an independent state in 1991, by Dr. Chernyk’s late husband, Alexander Chernyk, DO ’65, PCOM professor of surgery from 1969 to 1989 and director of medical education from 1969 to 1971. Among the UFA’s first efforts was to organize help for victims of the Chernobyl disaster, which had begun on April 26, 1986. The worst nuclear power plant accident in history, the Chernobyl explosion resulted in radioactive particles entering the atmosphere and spreading over much of the western U.S.S.R. and Europe. “Very little could be done while the Soviet Union was still in existence,” says Dr. Chernyk. “And they were so unprepared for this calamity, and for the severity of the injuries.”

Today, Dr. Chernyk’s “normal work” is complicated by the plight of those who have been wounded in Ukraine’s political conflict. When that conflict escalated at the end of December 2014, Ukraine’s military hospitals were flooded beyond capacity. Patients typically suffered from gunshot wounds and extensive burns, the latter requiring specialized care that is in limited supply. By January 2015, Dr. Chernyk had about 20 such patients currently receiving U.S. treatment; ten had already been treated and returned home. Another 30 awaited assignment to trauma centers, as Dr. Chernyk sought the help of her colleagues around the country and in Philadelphia (three of the wounded, for example, were treated at Wills Eye Hospital). “Many Ukrainian organizations help tremendously with humanitarian aid, but the UFA is the only organization that brings the Ukrainian wounded to the United States,” says Dr. Chernyk.

When U.S.-bound patients are well enough to fly from Ukraine on commercial air flights, the airlines may cover the cost. Those with more serious injuries may need to be evacuated by special medical planes, equipped with an emergency room, doctors and nurses. Even if professional services, including those of pilots, are provided pro bono, the fuel alone may cost $100,000. Any uncovered costs must be raised by Dr. Chernyk’s group.

Born in what was then the Ukrainian Soviet Socialist Republic and educated in Poland, Dr. Chernyk arrived in the United States in 1964; her mother’s family had been here since after World War II. She had been invited to do surgical research on kidney and pancreas transplants at Hahnemann University, and she later conducted research in renal pharmacology at Thomas Jefferson University Hospital. When, in the 1970s, Dr. Chernyk decided to become a clinician, she realized that much in the practice of medicine had changed since she had completed her medical education. “I was interested in new ways of treating patients,” she recalls, joking that after her time spent in pharmacology, she “wanted to stay away from chemicals!”

Admitted to a one-time-only PCOM program tailored to working people, Dr. Chernyk became one of 24 DO students, the others PCOM faculty members from across the disciplines who had basic science degrees. “We were to go through medical school in five years, taking afternoon and evening classes,” says Dr. Chernyk. “But we decided we would graduate in four years, and we did.” During the time she attended school, Dr. Chernyk had three children under the age of four. Yet she considered this seemingly daunting period “a breeze,” comparatively speaking. That’s because when she studied medicine in Poland, students were required to undergo military training. “I was in boot camp in the summer and in training on the weekends. I was in the Air Force; we had to do parachute jumps.”

After graduating from PCOM, Dr. Chernyk did her internship and a residency in internal medicine at Suburban General Hospital in Norristown, and then a nephrology fellowship through Lankenau Hospital Nephrology, conducted at Montgomery Hospital in Norristown. She has served as clinical associate professor of internal medicine at PCOM since 2009, and was chairman of the division of nephrology at Mercy Suburban Hospital in East Norriton, Pennsylvania, from 1982 to 2006. She continues to maintain her long-time nephrology practice.

Dr. Chernyk’s contributions toward strengthening ties between Ukraine and the United States and toward improving health care in Ukraine are attested to by numerous commendations and medals from the Ukrainian government. In 2008, she was honored by the U.S. House of Representatives “for her tireless efforts and service to Ukraine and the Philadelphia area Ukrainian-American community.” A dry sense of humor—“My new research project is inventing a 36-hour day”—overlays Dr. Chernyk’s commitment to and immersion in her work. When her dedication is characterized as remarkable, she politely but firmly disagrees: “It’s necessary, so it’s not remarkable.”