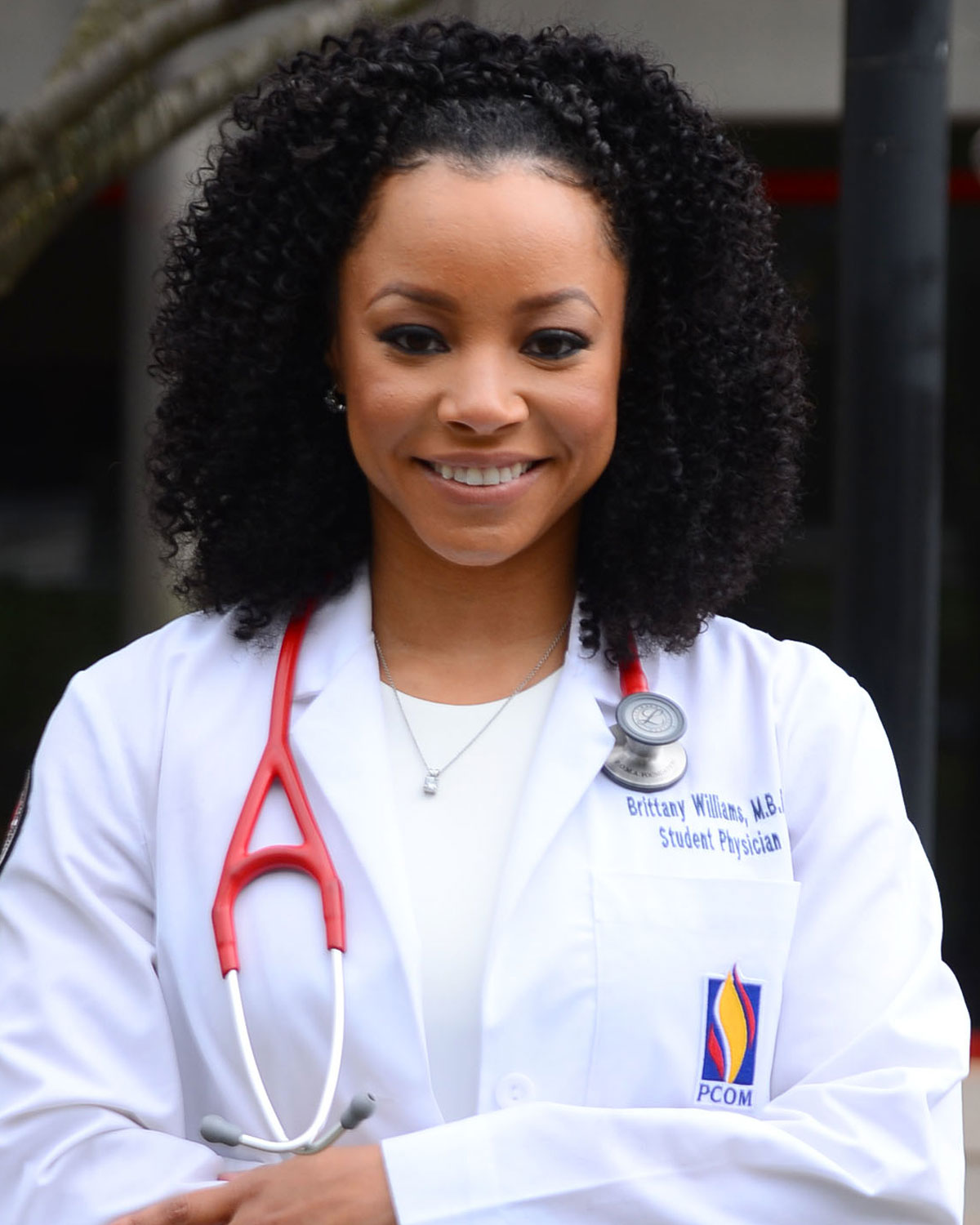 You could say that PCOM is in Brittany Williams’ DNA.

As a medical student, her mother, Barbara Williams-Page, DO ’92 (now the medical director for PCOM’s Cambria Healthcare Center), went in to labor with Ms. Williams, just as she was about to take the first of her final medical school exams. Ms. Williams was later born at PCOM’s City Avenue Hospital—where her grandmother had been a nurse—and her crib was a gift from Dr. Williams-Page’s classmates.

“If you look at the 1992 yearbook, I am all over it,” Ms. Williams says with a laugh. “When I got older, my mother would bring my sister and me to the clinic, or my father (Kenneth Williams, DO ’93, who now practices family medicine in Moreno Valley, California) would take us on overnight rounds at the hospital. PCOM has always been a part of my life.”

And, while some children might deign to follow in their parent’s footsteps, Ms. Williams was delighted to. “I knew from the time I was five years old that I wanted to be a doctor,” she says. “Once I was old enough to understand, I saw that the patients loved my parents—they had a connection, and I loved that. Every time I went into the office, there was a graduation announcement or a wedding announcement. Seeing how loved they were really resonated with me, and made me want to be a doctor.”

Ms. Williams says she was initially interested in surgery but became more enamored with primary care after her first clinical clerkship in family medicine, with her father. “I really became attached to the patients. I enjoyed getting to know them outside of just reading their charts, and that’s what planted the seeds of primary care.”

As she prepares to leave PCOM and start her residency in family medicine at St. Joseph Medical Center in Reading, Pennsylvania, Ms. Williams says she is interested in perhaps one day opening her own practice, and feels that earning her MBA along with her DO will fully prepare her to do so. “Physicians should have an understanding of the business side of the industry, too,” she says.

“I have so many visions as to the type of practice I want to have,” she adds. “The industry is moving toward focusing on wellness rather than medication, and I’m really appreciative of the practices that focus on that.”

Ms. Williams says she has always been athletic—in fact, she competed in her first body building competition in May, the Ms. Natural Philly Competition—and wants to incorporate her love of fitness into the care of her patients.

“Nutrition, education, and fitness are cornerstones of staying healthy,” she says. “One of the main reasons I wanted to compete in Ms. Natural Philly was to use that as a platform, to spread that message to others.”